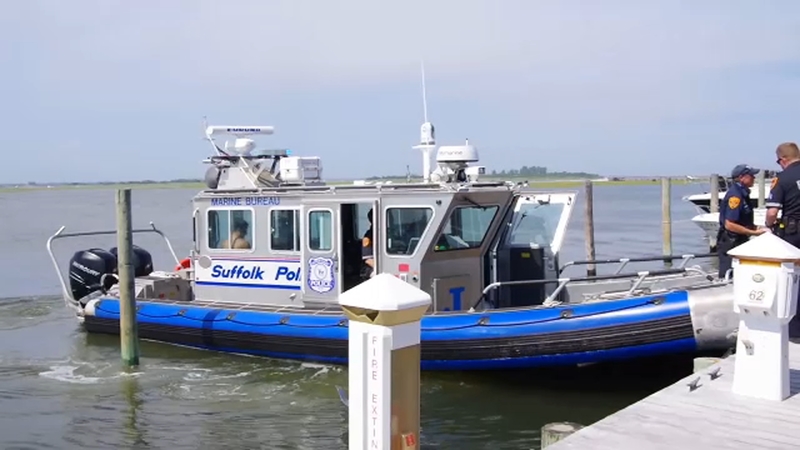 GREAT SOUTH BAY, Long Island (WABC) -- A man was killed and two people were injured in a boat crash in the waters off Long Island Sunday.

A passenger on the Activator, 25-year-old Zachary McCarthy, of Lindenhurst, was pronounced dead at the scene.

Nostrand, 58, of Farmingdale, and Morgan, 19, of Lindenhurst, were transported to Good Samaritan Hospital Medical Center in West Islip for treatment of minor injuries.

Both boats were impounded for safety checks.

"Both boats came around a bend at the same time, didn't see each other until just before the accident," Suffolk police Detective Lieutenant Shaun Spillane said. "They both took action to avoid each other. Unfortunately, one of the boats turned sideways, and the whaler struck the Activator broadside."

Spillane said McCarthy was struck by the whaler and suffered severe head trauma.

He said both vessels appeared to be going a proper rate of speed, and both vessel operators submitted to alcohol tests, which were negative.

The crash happened just days after officials on Long Island pleaded for boaters to stay safe ahead of the upcoming Fourth of July holiday weekend.

Eyewitness News spoke with boaters Monday who said activity on the water is up dramatically.

"There's a little more freedom on the water, so a lot more boats got in a lot earlier this year," Babylon resident Peter Scarlatos said. "And they're using them a lot more."

Scarlatos said all 70 slips at Cedar Beach Marina in Babylon are booked for the holiday weekend.

"There's a lot of people," Amity Harbor resident Addy Noschese said. "It's not just the drivers. Your passengers are even out with their eyes to even make sure that they even see it, to helping out because there is a lot of activity going on out there, jet skis, a lot."

Officials are reminding boaters they need to follow all the safety rules, like not speeding, not drinking while driving a boat, and making sure a life vest is worn by anyone under the age of 12.

"Now is a really important time to remind people that with the enjoyment of our beautiful waters here on Long Island we also need to be cautious," Hempstead Town Supervisor Don Clavin said. "We need to be safe."

Sohm said people must wear a life vest at all times while participating in tow water sports and an observer 10 years of age or older must be watching the person being towed. In the Town of Hempstead, it is illegal to participate in water sports in canals.