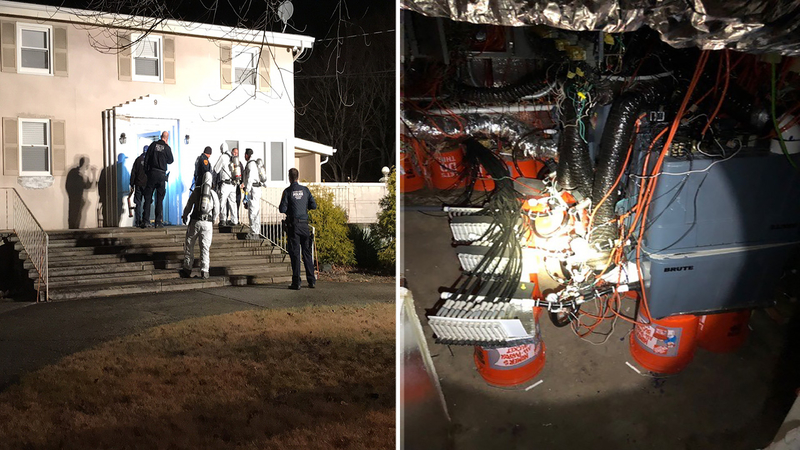 They say the house on Roda Drive in Mastic appears to have been used to manufacture ecstasy and growing hydroponic marijuana.

The warrant was served Thursday night, and Joseph Guida, an employee with the Department of Environmental Protection, was arrested.

"All I saw was flashing red lights last night about 11 o'clock, and they were around the block since then so drips and drabs, really not given much information," neighbor Eddie Steinmacher said. "They haven't evacuated us. I'm sure it's under control, so, and they'll deal with it. If it's something more, I'm sure they'll come around."

Authorities said chemicals were also found in the house that will be tested at the scene of what authorities are calling one of the most sophisticated drug labs they've seen in a while.

BREAKING: Joseph Guida, an NYC Dept. of Environmental Protection employee, has been named as the man behind a sophisticated drug lab operating out of a home in Mastic manufacturing large quantities of ecstasy and pot. pic.twitter.com/rLMBxkrhbm

The house reportedly belongs to the girlfriend of the suspect, who lives in New York City.

Prosecutors say they seized 63 pounds of pot between house and Guida's house in Queens.

Guida, who is a father, will be released on bail on home detention and will have electronic monitoring. He will have to be screened and, if needed, get treatment for substance abuse.

Prosecutors say precursor chemicals to make ecstasy came from China and that they weren't stored in safe manner and could have been dangerous to anyone who came in contact with them.

He allegedly had 1.9 kilograms of precursor, which could make about 2.2 pounds of MDMA.

He faces a mandatory minimum of five years in prison for having that amount of pot, and he could face up to 40 years if convicted of all charges.

"I have never seen any, like, strange people in the area or anything like that," neighbor Jillian Aiello said. "I mean, you would have never known. The worst we have is we have some knucklehead kids that will ride on the little motorbikes or whatever. But this is, I mean, you would never imagine this here."

Guida will be allowed to keep his job with the city pending trial and will be able to continue working.

The residence was reportedly located as part of an ongoing HSI investigation.