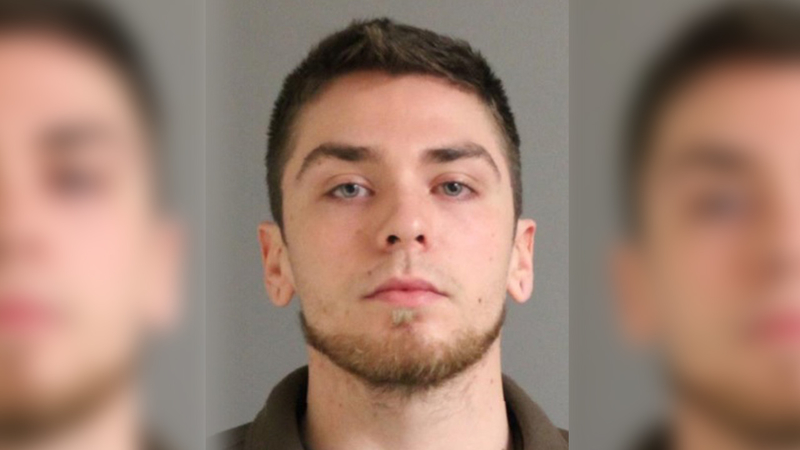 ULSTER, New York (WABC) -- A New York man has been charged after he allegedly turned off the lights in a store's cooler and told a Jewish co-worker standing inside that she was "in the gas chamber now."

The incident happened at Mother's Earth Storehouse on Kings Mall Court in Ulster earlier this month.

The 18-year-old woman was working in the store's cooler when she said a co-worker, William Sullivan, came into the doorway, shut off the lights, made the anti-Semitic remark and insulted her Jewish faith.

Gov. Cuomo spoke at a news conference about a woman allegedly harassed at work because she is Jewish

Sullivan, 21, of Saugerties, was arrested Friday and charged with aggravated harassment, part of what Acting State Police Superintendent Keith Corlett called "a disturbing trend of increase in hate crimes."

"This is not an isolated situation," Cuomo said. "We have been seeing a growing number of anti-Semitic activities. This is something everyone must be concerned about."

The store's owner tells the Daily Freeman that Sullivan was fired and the woman has quit.

The woman's attorney says Mother Earth's Storehouse did nothing to protect the victim.

"Mother Earth's response was a perfect example of how not to respond to a complaint of workplace harassment. They did nothing to keep Sarah safe. They belittled anti-Semitism in the workplace and told Sarah to keep quiet. The problem at Mother Earth is not just the employee; it is management. We will pursue every available remedy in response to Mother Earth's appalling conduct.," Ilann M. Maazel of Emery Celli Brinckerhoff & Abady wrote in a statement.

The victim, Sarah Shabanowitz, released her own statement, saying she was"horrified" by the incident and the store's response.

"The way Mother Earth treated me was wrong. Not just Will, but management and the ownership. No one did anything to make me safe," she wrote. "No one took this seriously. Instead, management ordered me to keep quiet.

I will not be quiet. No one should be subjected to anti-Semitism or racism or sexism at work."

"The Management Team at Mother Earth in Kingston would like to again apologize to our community for the immense upset that has occurred. We have been rooted on our community for over 40 years and have never incurred something such as this. There has been a lot of misinformation being shared on social media. At this time, this situation has moved out of our hands, as the two employees are no longer working for us. We are taking what we feel are the necessary steps to insure that situations like this never happen again. We have hired a Human Resources company to help us with any future situations that could occur. We have mandated our entire staff to complete a training course to prevent these types of instances in the future. Our Management Team will also undergo additional training courses on how to properly handle any future HR situations."

State police said Sullivan had no prior criminal history. Sullivan and Shabanowitz worked together for about a year, they said.