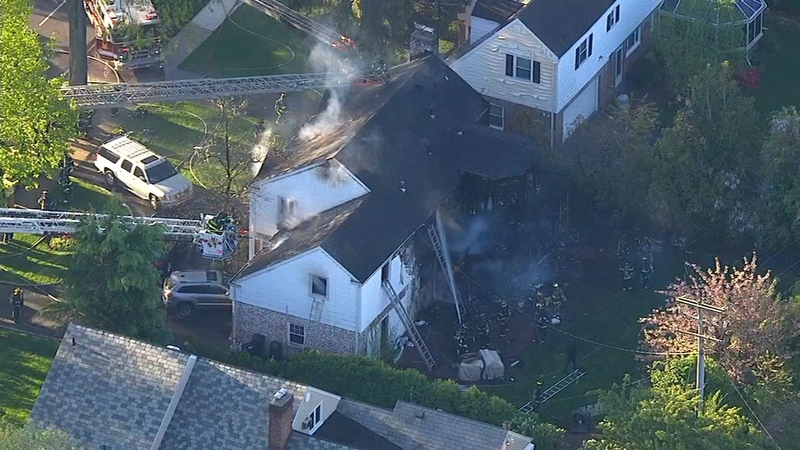 Man, wife and their teenage daughter killed in house fire on Long Island

GARDEN CITY, Long Island (WABC) -- Three people died in a house fire on Long Island early Thursday, and when combined with a massive blaze at a commercial waste facility in Westbury, all 71 of Nassau County's fire departments were dispatched at the same time.

Fire crews arrived at the home on Washington Avenue in Garden City around 6 a.m. to find heavy smoke pouring from the top level of the house, and when passersby noticed three vehicles in the family's driveway and heard a dog yelping, there was a feeling of dread.

"I didn't hear anyone," witness Joseph Morton said. "I was screaming, running around the sides of the fence. The smoke was so bad in the back of the house, yeah, it was a horrible experience."

Authorities also say no one from inside the house even called 911, another bad sign.

The fire went to six alarms, with more than 200 firefighters responding from 27 different departments.

The victims were identified only as a 62-year-old man, a 60-year-old woman and an 18-year-old woman, but neighbors say they were parents and a daughter who were very active in the Garden City schools.

They say the teen was a high school senior with big dreams.

"She was an all around good student, nice girl," neighbor Kathy Ford said. "I believe she was going study voice in college She had just committed to NYU. They had the door all decorated with the NYU colors."

A police officer suffered smoke inhalation and two firefighters were also injured at the scene.

There is no word yet on what sparked the flames.