Series of carjackings take place in Manhattan within 1 hour span 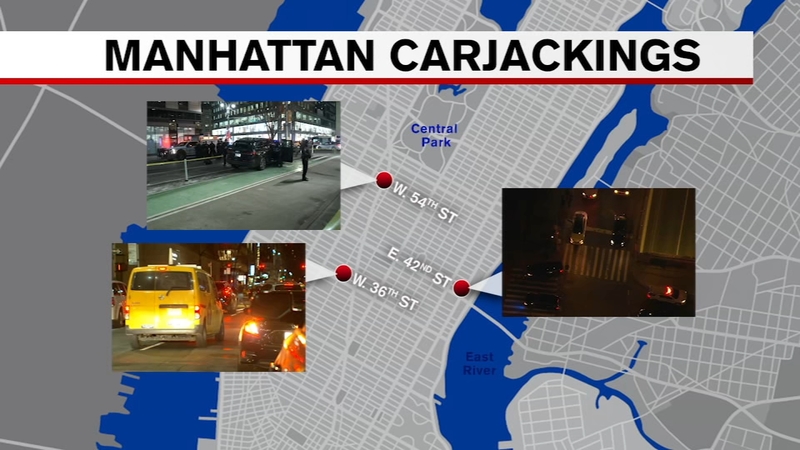 MANHATTAN, New York (WABC) -- Three car jackings took place within an hour of each other in Manhattan Wednesday.

They say a suspect wearing a ski mask and all black clothing took out a taser and stole a vehicle at 54th Street and Broadway.

The vehicle was recovered, but the suspect fled on foot into the Columbus Circle A/C line subway station.

An officer suffered a minor injury in the incident and was taken to a nearby hospital.

Police say the suspect crashed into three parked cars while fleeing from the scene.

Less than an hour later around 5:20 p.m., a victim was sitting inside his car at West 36th Street in Manhattan, when he was approached by a man who began to ask him questions.

The suspect then took out a box cutter and demanded the victim exit the car.

Police say the suspect then took off in the black Infiniti with TLC plates.

No arrests have been made and the vehicle has yet to be recovered.

Police were conducting a routine car stop at the intersection of East 42nd Street and First Avenue.

Officers pulled the car over and took one man into custody. They say one suspect is still at large.

The vehicle was stolen from Brooklyn, but it's unknown when the carjacking took place.

Police say none of the three car jackings are connected to one another.