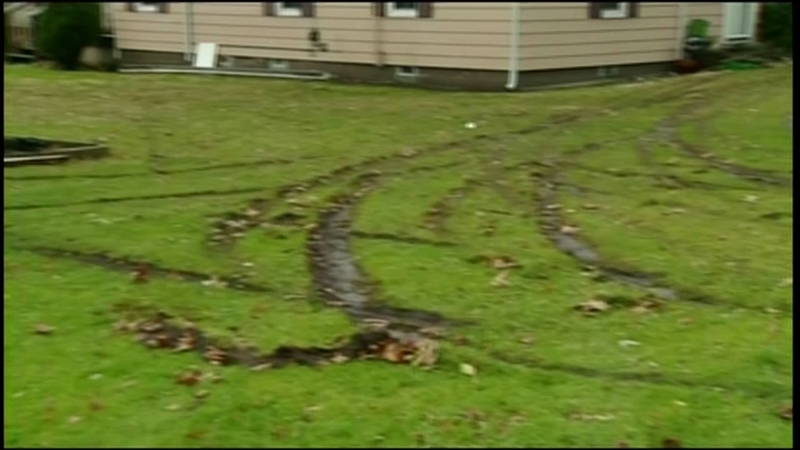 CONNELLSVILLE, Pennsylvania -- A woman is accused of tearing up her ex-boyfriend's yard with her car and hitting anything in her path, including a pool.

Mary Jo Smith, 47, drove through the yard to run over anything she possibly could.

Alan McCutcheon says he was setting up a Christmas light display outside of his Fayette County home when Smith yelled, "Merry Christmas" and made several passes through his yard.

State police say Smith attempted to hit the 64-year-old along with his wife and adult daughter. No one was injured.

The yard is covered with tire tracks from a Jeep SUV that state police say was driven by Smith.

"The ex-boyfriend did attempt to make contact with her at one point by coming out of the residence," Lucas said. "At that point, she attempted to drive the vehicle at him. He had to use the tree that was in the yard for cover."

That was just the front yard. Troopers say Smith drove the vehicle into a pool behind the home.

The object of Smith's rage wasn't available for comment. Another person present during the incident somehow was able to get ahold of Smith when she stopped the Jeep.

"She was able to be subdued by some of the other occupants that were there at the house at the time until we were able to arrive and take her into custody," Lucas said.

Smith, who troopers say was drunk at the time, faces multiple felonies, to include aggravated assault and DUI.

According to the victim, Smith was an old flame he thought was completely extinguished.

"They really hadn't had contact in about five years," Lucas said.