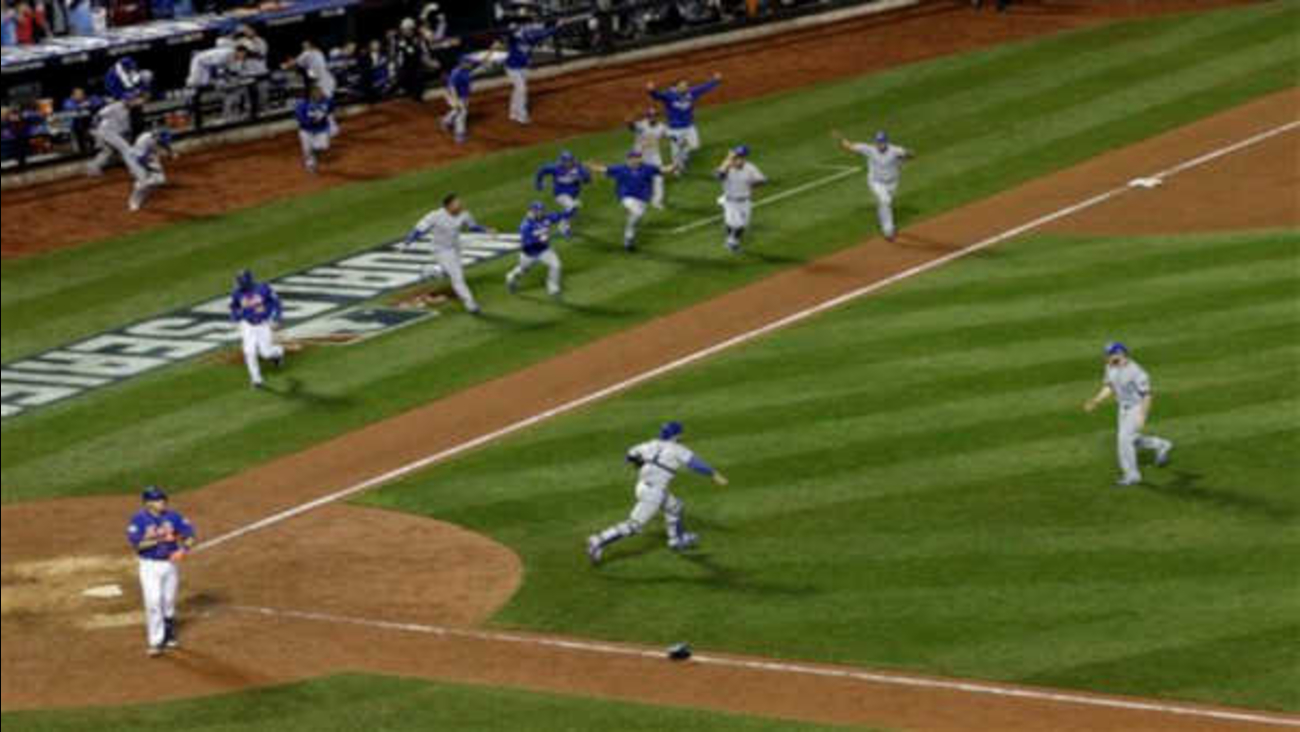 AP
FLUSHING -- Matt Harvey demanded the ball in the ninth inning of the Mets' biggest game in years, the biggest start of his career.

He got it. And once again in the World Series, Harvey did not get the result he hoped for.

It's final. Not the way we wanted to end the season. The team worked hard to get to the #WorldSeries but we fell short of the ultimate goal.

This time the Dark Knight had plenty of help in wasting a lead, and New York's season came to a sudden end early Monday with a 7-2, 12-inning loss to the Kansas City Royals in Game 5 of the best-of-seven series.

Daniel Murphy made another key error. Jeurys Familia blew his third save chance, and the New York's bats were silent as their surprising late-season run to their first postseason since 2006 was quashed by the crisper Royals.

With fans chanting his name even before he took the mound for the first pitch, the 26-year-old Harvey looked as if he was determined to set aside all the controversy that seemed to follow him this season, his first after having Tommy John surgery in late 2013.

No more September talk about innings limits that rankled the Mets' front office and fans, his social life or Instagram account.

Harvey was determined to carry his teammates back to Kansas City for Game 6 after failing to hold a two-run lead in the sixth in the Series opener.

He gave up just four singles in the first eight innings, and used all his pitches to strike out the Royals' stingy lineup nine times, including the side in the fourth and three more in the fifth - around a walk.

After striking out Mike Moustakas with a 98 mph fastball to end the fourth, he pumped his fist and gave a couple of euphoric shouts as he stomped off the mound.

Following Alex Rios' groundout to end the seventh, Harvey threw his hands in the air and implored his teammates, "Let's Go!"

He stalked off the mound with a 2-0 lead at the end of the eighth, having thrown 102 pitches. After talking to pitching coach Dan Warthen, he rushed to Terry Collins and implored his manager to let him finish for just the second career complete game.

Harvey sprinted out to the mound in the ninth and chance to wrap up a gem that would keep the Mets alive in the Fall Classic. But he walked Lorenzo Cain and gave up an RBI double to - who else? - Eric Hosmer. Harvey stoically walked off the mound as Familia jogged in from the bullpen.

The Royals' put the ball in play against the Mets' beleaguered closer, and New York's defense botched one more late chance as Kansas City overcame another postseason deficit.

David Wright fielded Salvador Perez's broken-bat chopper and made a one-hop throw to Lucas Duda for the out at first base. But Hosmer made a daring sprint home and Duda's throw was way off target as the Royals' first baseman slid headfirst into home plate with the tying run.

The NL East champions fell apart in the 12th. Addison Reed gave up the go-ahead run, then Murphy botched another play that left fans gasping for a second straight night that broke open the inning.

Kansas City fought back against two of the top arms on the pitching-rich Mets: Matt Harvey and Jeurys Familia. And the Royals won it not with power at the plate but instead an aggressive sprint home by Hosmer on a groundout, a three-run double from Lorenzo Cain, a couple of crucial steals.

"I couldn't have written a better script," Yost said.

That's how Series MVP Salvador Perez and the Royals became the first team since the 2002 Angels to come from behind in all four World Series wins, according to STATS.