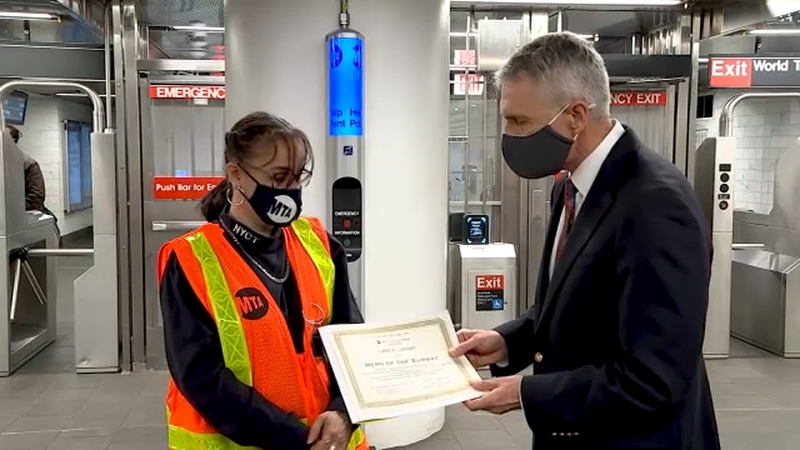 NEW YORK CITY (WABC) -- A quick-thinking MTA station cleaner who alertly noticed a gun in a man's waistband was honored with a commendation Tuesday.

The incident happened around 7:15 a.m. on the 1 train platform at the World Trade Center/Cortlandt Street station in Lower Manhattan, where Ivette Leonetti was cleaning around the man when she spotted the weapon.

She said the man on the bench was polite, soft-spoken and not the least bit threatening, but she did a double take.

"I told him, 'I need to clean that area,' and he said, 'No problem,'" she said. "He was nice about it. As he was moving his stuff, I noticed that he had a gun. He was so polite that I wasn't really that scared."

Authorities say she kept calm, walked away, and found a police officer, who responded and made the arrest.

Ty'Shawn James, 14, was honored Wednesday for using CPR to save his friend who collapsed while they were playing basketball.

Two officers came up one staircase, while two others came up from the far end of the station. They converged and confronted the man in the middle of the platform.

The man, 36-year-old David Taylor, is said to be homeless and was taken into custody. Police recovered a loaded 9-millimieter semi-automatic handgun.

The NYPD released a photo of the arresting officers, and Leonetti was honored Tuesday by MTA Chief Safety Officer Pat Warren.

An alert @MTA worker saw something & said something, bringing our District 2 team to the WTC station with reports of an armed man. Officers converged on the suspect & seized a loaded gun from his waistband. Investigators are now exploring his ties to a crime in his home state. pic.twitter.com/BW6km0F0SO

"It's just amazing when you have somebody who's got that wherewithal to say, 'I see a problem and I'm going to personally take it on myself,' take the responsibility to solve that problem," Warren said. "And it just doesn't happen every day."

Late last week, an 18-year-old man was arrested in the Times Square subway station with an unloaded AK-47 assault rifle. The weapon was in plain sight, when it was spotted by uniformed transit officers.

MTA officials have urged the NYPD to provide hundreds more officers to patrol the platforms and the stations amid a dramatic increase in crime earlier this year. Yet the deployments have not changed.

Leonetti has been a station cleaner for 23 years, and she hopes her actions will inspire others.

"Please, if you see something, just say something," she said.

Taylor is charged with criminal possession of a firearm.