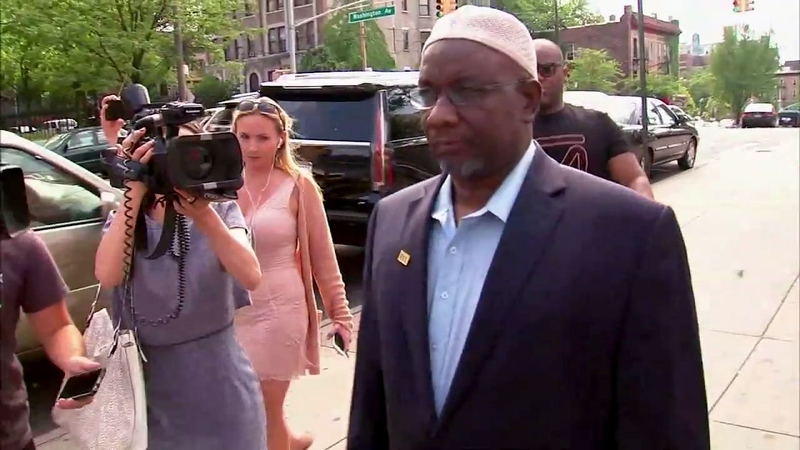 Bronx man speaks out about killing of wife's attacker

CLAREMONT, Bronx (WABC) -- The Bronx husband charged in connection with the death of the man who tried to rape his wife spoke to reporters Wednesday, saying "I don't want to be a hero".

Mamadou Diallo was released on his own recognizance after appearing in Bronx Criminal Court Tuesday night.

Surveillance cameras inside his Washington Avenue apartment captured Diallo Monday night repeatedly beating 43-year-old Earl Nash with a tire iron, after his wife pegged Nash as the suspect who brutally beat and tried to rape her.

People cheered for Diallo as he left his apartment Wednesday and called him a hero.

Asked by a reporter, "Are you happy about what you did?", Diallo responded, "Nobody happy about that."

The 61-year-old Diallo was met with cheers outside the courthouse Tuesday night.

In court, Diallo's attorney called the incident an attack on Diallo's family under extreme circumstances, and asked for the judge to release the cab driver and father of three on his own recognizance.

The judge granted the request, only arraigning Deallo on assault, weapons possession and harassment charges.

He was originally arrested by the NYPD for manslaughter.

Next Tuesday the case will go to a grand jury, which could still choose to indict Diallo for manslaughter.

Diallo is due back in court on June 27.

Nash has 14 prior arrests. He served five years behind bars for a 2006 conviction for selling drugs and bribery. He was released in February 2011, returned the next April, and then was released July 2015.

So far there is no official cause of death.