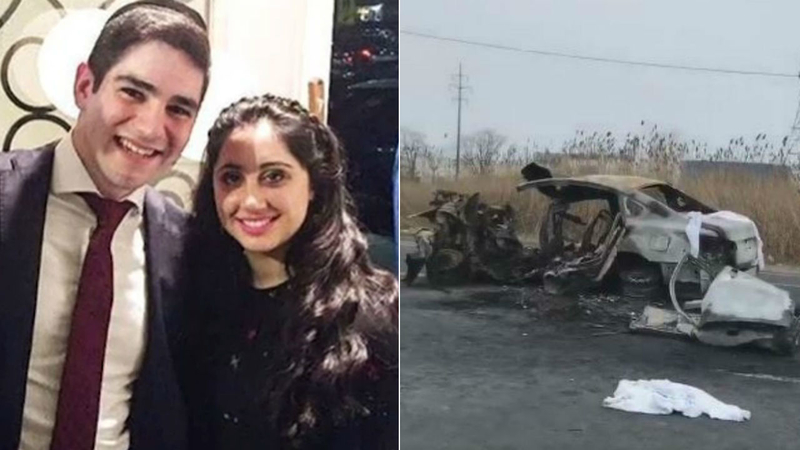 INWOOD, Long Island (WABC) -- A Brooklyn man convicted in connection with a 2018 crash on Long Island that killed a newly engaged couple was sentenced Tuesday to 18 years to life in prison.

He has two prior felony convictions and a criminal record dating back to when he was just 15 years old.

Zakiyyah Steward, who along with Watkins was part of a group of cars traveling in the northbound lanes of the Nassau Expressway in Inwood from Far Rockaway to a Queens casino, was sentenced to 3 to 9 years in prison.

"We're all at a great loss because they're not in this world," he said after court.

Watkins was driving a 2010 BMW GT recklessly and more than twice the speed limit when his vehicle crossed over the double yellow lines and struck the couple's 2017 Nissan Altima head-on.

Levin and Kaplan were returning home from a Passover gathering and were to be married in June 2018.

The Altima burst into flames, was pushed backward, and continued to burn. Watkins then struck a silver Infiniti driven by James Hamilton, leaving him with a fractured spine and injuries to his hand, ankle and knee.

"The judge had the opportunity to do the right thing and to give 25 years," dad Samuel Levin said after court. "He chose instead to only give 18. Compassion to the criminal. Where was the compassion to Yisroel and Elisheva?"

Steward was driving a 2016 Hyundai Genesis next to Watkins at a high rate of speed and while intoxicated and impaired by marijuana.