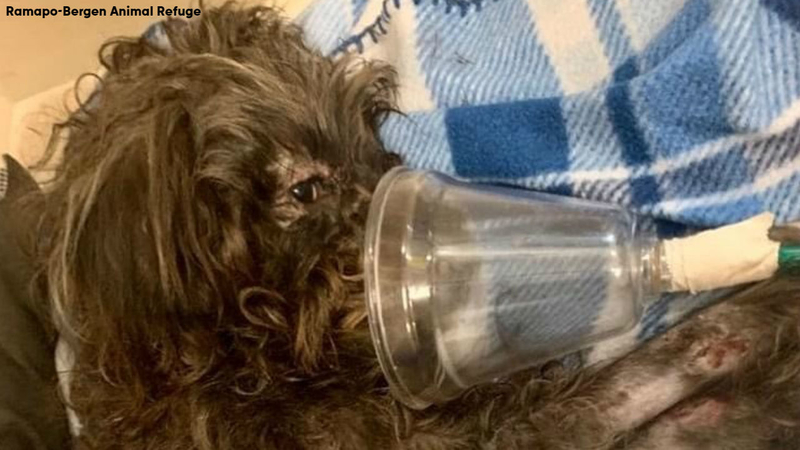 Poodle fighting for its life after being thrown from car

PATERSON, New Jersey (WABC) -- A poodle named Bear is fighting for his life after being thrown out of a car in New Jersey.

Around 1:30 on Saturday afternoon, an eyewitness saw someone throw the dog out of a car near 927 Market Street in Paterson.

The Monmouth County SPCA rescued 61 dogs and puppies from a hoarding situation in Middletown, New Jersey.

Bear was taken to Oradell Animal Hospital, where he is in grave condition and is suffering from a skull fracture, pelvis fractures, skin lesions, and a herniated diaphragm, according to Paterson Animal Control.

"I mean if you don't want your pet, contact animal control, contract somebody, but let me tell you one thing, like I said before, this is killing me, are you supposed to take your job home with you, no, but I take absolutely everything home with me and this bothers me like everything else bothers me after 48 years," said John Decando with Paterson Animal Control.

Ramapo-Bergen Animal Refuge said Bear had been minimally responsive since he was rescued, but started to show signs of responding like lifting his head when the doctor spoke to him.

However, due to respiratory issues because his stomach herniated into his chest, rescuers felt surgery, although very high risk, was necessary.

"During surgery, a large tear was found, herniating Bear's liver into his chest cavity," RBARI said. "Surgery was complicated, but successful. Bear is a true fighter. A chest tube and feeding tube were inserted to assist with recovery. Bear's care and measures to save his life have been extensive and costly. But, it was clear based on Bear's condition upon rescue that he has not had much kindness in his life. It is our hope to give Bear the chance to live, to be cared for, and to know love. He is comfortable, medicated, and sleeping most of the time to allow for his body to attempt to heal. We thank you for putting your faith in us to help Bear, despite the difficult odds. Please keep Bear in your thoughts. He is fighting for his life, but in a time of great uncertainty, sometimes it feels as if he is fighting for us all."

It is unclear how old the dog is, but officials say he appears middle-aged. They also say he is emaciated, and his fur is matted.