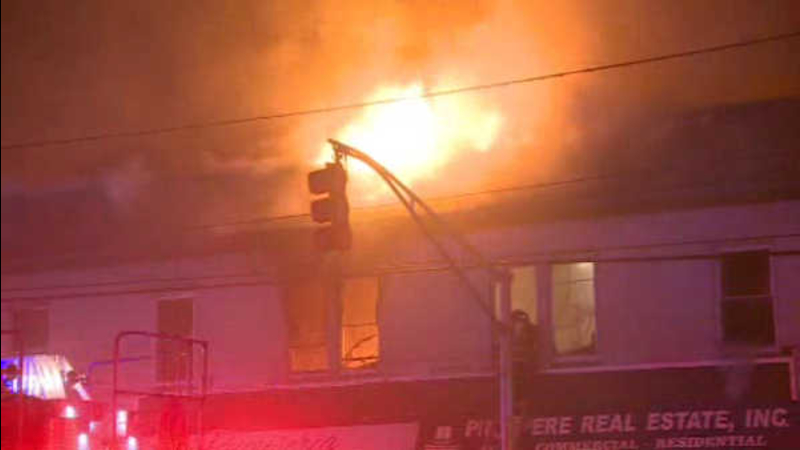 4-alarm fire rips through row of businesses in Irvington

The fire started at about 1:30 a.m. in the basement of a bar and restaurant on Florence Avenue and quickly spread to other buildings. It was placed under control several hours later.

"On arrival, there was heavy fire conditions on the first floor of a combination bar and restaurant extending to the second floor and the roof area," Irvington Fire Chief John Tierney said. "With the four alarms, we have two members injured. One transported to the hospital for back injuries, the other for frostbite."

Tierney said there was a partial roof collapse.

A 4 alarm fire in Irvington, NJ has already burned through several businesses and apartments. No injuries. @ABC7NY pic.twitter.com/co2JGwePAd

Frigid temperatures and icy conditions on the street also made it more difficult for firefighters, who spread salt on the street to prevent slips and falls.

People who live in the above apartments say the fire moved fast.

"I heard my cousin screaming 'fire, fire,'" resident Jeremy Zamora said. "In seconds, there was smoke in the ceiling...Thank God my cousin woke us up. I would not be standing here speaking to you right now."

Abraham Luciano and his family lived in the apartment above the Headquarters Sports Bar and Grill, where the fire chief says the blaze started.

"When I opened the back door, I just saw fire coming from the back window of the bar going up towards my room," he said.

He woke up his cousin and then began making rounds quickly throughout the second level.

"I called him to get my mom out, and then I ran to the back door and banged on the apartment door to get other people out," Luciano said.