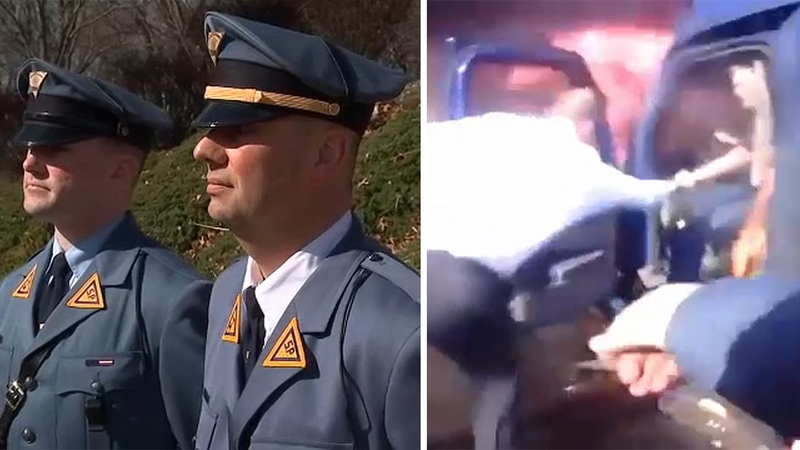 BRIDGEWATER TOWNSHIP, New Jersey (WABC) -- The two New Jersey State Police troopers who pulled a man out of a burning tractor-trailer spoke out to Eyewitness News about their intense experience.

Trooper Robert Tarleton hesitated for not even one second when he jumped into his vehicle and called fire rescue as he raced as to the fiery truck in the inner lanes of I-287 in Bridgewater.

"I had witnessed a vehicle crash, so at that point I knew the driver was still inside," Tarleton said. "Priority number one was just going to be getting that driver out."

He arrived to find state police Lt. Edward Ryer, who was headed home and already had his eye on the tractor-trailer before the crash.

"I saw the truck on the inner roadway and it came it swerved onto the grass median," Ryer said. "And then I saw him veer off again, and now he was headed toward the guide rail and bridge."

Their training and whatever passion they are born with to pursue a life of saving lives kicked in as shown on Tarleton's body camera.

While the officers dragged the driver, Ron Hickman, across several lanes away from the burning cab, the stunned driver had gone in and out of consciousness. He was rushed to Morristown Medical Center alive because of the two troopers training and bravery.

"For me, I thank God for putting me there to help out and for giving me the strength to do so," the officer said.

The driver is out of the hospital and on his way to Ohio.