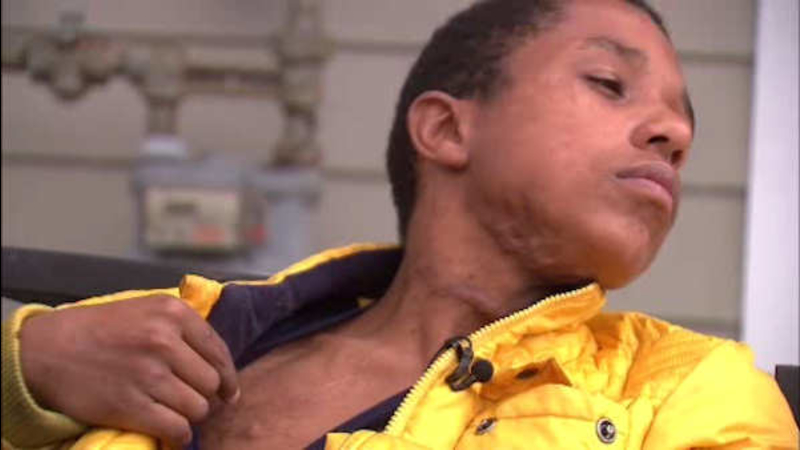 Catching up with Deandre one year later

NEW YORK (WABC) -- Last December, we told you the story of Deandre Bloomfield, a 13-year-old from Staten Island who was deliberately set on fire by a classmate. Now, a year later, the teen is in danger of falling through the cracks.

Deandre, who was in the hospital burn unit for a month, is now in eighth grade.

His physical scars from being bullied and burned have healed, but emotional healing takes longer. His story made so many viewers cry or angry -- or both. According to authorities, a bully at school who used to hit him and make fun of the limp he's had since birth one day invited Bloomfield over as a friend. The suspect, also 13 at the time, allegedly sprayed a cologne on him and lit a match into the stream.

Police told Bloomfield's mom that for two agonizing hours, the bully and an adult tried to cover it up, changing his clothes but waiting to call 911. Later, the bully was arrested, his family moved away, and no one's been seen since.

Unlike his younger twin brothers, Deandre doesn't smile much these days. But his mother says he used to and was all spirit.

"He goes to therapy outside the school and inside the school," mom Ursula Allen said. "They say it's just going to take a little time."

Still, Deandre is a boy of few words. And the young man, who has trusted so many times only to be disappointed, says he is trying to be happier and to follow his dreams.

"I might be a lawyer or something," he said, perhaps with the hope of sticking up for kids like him.

Last year, we started the hashtag #HisNameIsDeandre, in the hopes that he would take some comfort in knowing that all of New York City was pulling for him.

"Thank you, all the New Yorkers," he said.

We reached out to wonderful organizations around our area, all the places with big hearts that can turn Deandre's expressions and outlook around. We got immediate help from Big Brothers Big Sisters and Born This Way, the anti-bullying foundation founded by Lady Gaga and her mother Cynthia.

It has been a long way back for the 14-year-old, but he should know how much love and support is out there for him. This may be the worst case of bullying cruelty we have seen, but we also wanted to update everyone interested in helping him back.
Related topics:
new york citydongan hillsbullyingfire
Copyright © 2022 WABC-TV. All Rights Reserved.
RELATED
Staten Island mom says disabled son intentionally burned by bully
TOP STORIES
Flight delays ease up amid chaotic 4th of July weekend travel
1 killed, several injured in shooting at mechanic shop in NYC
Ex-boyfriend arraigned in murder of Upper East Side mom
AccuWeather: Less humid
Good Samaritan tries to save man seen jumping in Hudson River
Hard Rock deal ends casino strike threat in Atlantic City
Smoky 4-alarm fire breaks out in New Jersey building
Show More
Man shot in the head while riding scooter in the Bronx
3-year-old boy dies after falling from 29th-floor balcony in Manhattan
Where to watch 2022 Fourth of July fireworks
Macy's 4th of July Fireworks 2022: Everything to know
Jet truck driver killed in air show accident | VIDEO
More TOP STORIES News