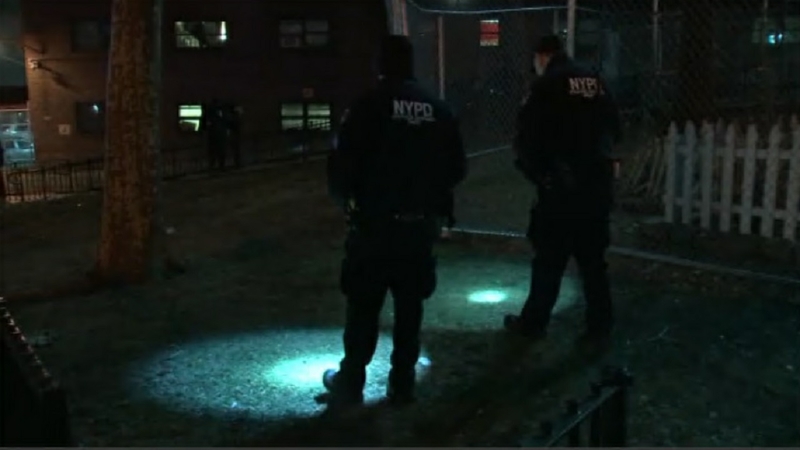 Off-duty NYPD officer shot in the foot in Manhattanville

MANHATTANVILLE, Manhattan (WABC) -- An off-duty NYPD officer was taken to the hospital after being shot in the foot in Manhattanville.

It happened around 4:30 p.m. Saturday at the Manhattanville Houses community center on Broadway near 126th Street.

The 47-year-old housing officer was off-duty, attending a vigil in the community center for a longtime resident when two men dressed in all black opened fire towards the building.

"This is our seventh police officer shot this year, and we're thankful - all of us are thankful, a whole city is thankful this incident isn't much worse," said NYPD Housing Bureau Chief Jeffrey Maddrey.

The officer, and other civilians dove for cover, only later, as the off-duty officer helped detectives piece it all together, did he feel pain in his foot.

"An ambulance came, he was looked at and examined in the back of the ambulance, and he realized that he was shot in the foot," added Maddrey.

WATCH | NYPD holds update on Manhattanville shooting: 'We shouldn't have to live like this'
EMBED More News Videos

An NYPD officer was shot in the foot in Manhattanville on Saturday.

The officer is in stable condition at Mount Sinai Morningside, and doctors expect him to make a full recovery.

"A foot injury, any gunshot wound is potentially life or limb-threatening," said NYPD Chief Surgeon Dr. Eli Kleinman, "This bullet traversed critical vessels, nerves and tendons, but we expect him to make a full recovery."

Eyewitness News has learned that police have clear video of the encounter, and they are activerly searching for suspects brazen enough to fire, wildly.

It is not clear who the suspects were trying to target. The off-duty officer, like so many New Yorkers, was just another unintended victim of violence.