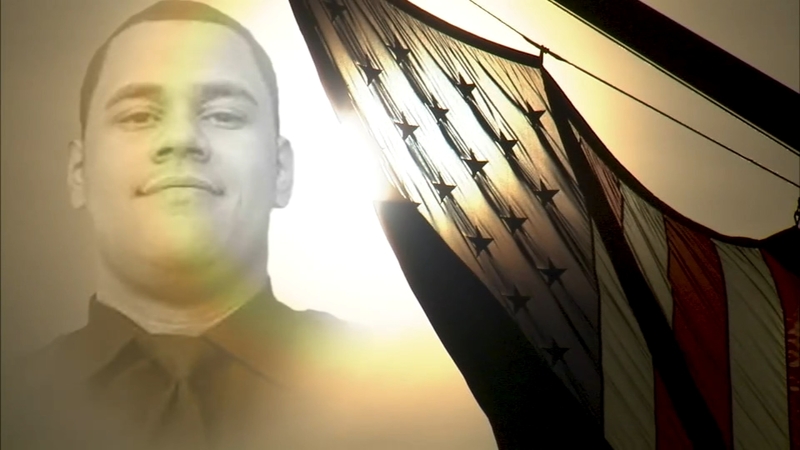 NEW YORK CITY (WABC) -- For the second time in less than a week, mourners across New York City and the country came together to bid a final farewell to a fallen NYPD officer.

Family, friends and a sea of brothers and sisters in blue gathered for the funeral for Officer Wilbert Mora at St. Patrick's Cathedral in Midtown Manhattan, with burial following in Woodside, Queens.

Thousands of law enforcement officers -- in the air, on a seemingly endless caravan of motorcycles, and thousands more on foot -- filled the expanse of Fifth Avenue to honor the fallen hero.

"I just want you to know that I was always proud of you, you chose a life of service to your community into our adopted country," Wilson Mora said. "Your fellow officers were not only coworkers, they were friends and family. And now they're my family. I love you baby bro and I will always miss you."

Mayor Adams thanked Officer Mora's parents, who came to New York City from the Dominican Republic, "for sharing your son with our city."

"Wilbert was only 7 years old when he came to New York City," Adams said. "But he knew he wanted to be a member of our department right away."
EMBED More News Videos

Officer Mora, who was 6-foot-3, "served this department bravely, as a colossal symbol of promise, not for the size of his frame but for the goodness in his heart. He was a true leader," Commissioner Sewell said.

When the mayor visited Officer Sulan and his family in Queens, the officer told Adams he was going to put his uniform back on and help him fight address gun violence.

Mora was fatally shot along with his partner, Officer Jason Rivera, while responding to a domestic violence call in Harlem last month.

"Now I only wonder how many Wilberts? How much Jasons? How many more officers will they have to lose their lives for this system to change?" said Karina Mora.

Amir Yakatalli was their commanding officer at the 32 Precinct in Harlem. He said on that chaotic night, Mora did everything right.

"With limited space and cover, Wilbert used precious seconds while still in the line of fire to return fire," Yakatalli said. "Being the born leader and protector that Wilbert was, he didn't freeze but fought back, trying to stop the threat and hopefully save others. To the Mora family and especially his brother Wilson, know that Wilbert went out fighting. Although he's gone you can be proud, that like you, he was a soldier and a warrior and tried to protect himself and his fellow brothers."

In a final act of heroism and at his request, the 27-year-old officer's organs were donated to save the lives of others.

Thousands of officers gathered on the streets of Midtown to offer a final salute to their brother in blue.

"It's a range of emotions," Suffolk PBA President Noel DiGerolamo said. "It goes from sorrow to confusion and anger. I have a 27-year-old myself. We are burying a 27-year-old today."

As a motorcade brought Mora's body to its final resting place in Queens, fellow officers from near and far reflected on the solidarity that hopefully lightens the heavy burden of grief that rests on Mora's family -- grief now also carried on the shoulders of so many others who wear the shield.

"It shows them that we are all here for them," said Officer David Zara, of the Peel Regional Police Department. "It shows that we are going to be supporting them across the nation and internationally that they have all of our support."

Solidarity and support brought these public servants to the heart of Manhattan. Just like Detective Mora's family, their hearts are heavy as well, torn by more than grief and sorrow.

"It's a number of different emotions," NYPD Officer Yvonne Barnes said. "I mean, it is from one angle to the next. I'm proud to be here with my blue family, but I'm also very sad that we have to come together like this."

Joe Torres has more as mourners across New York City and the country came together to bid a final farewell to Det. Wilbert Mora.

It was a similar scene last week for the wake and funeral for Officer Rivera, with a police presence already in place before dawn outside the cathedral.

Rivera was just 22 years old and had only joined the force last year. He just got married in October.