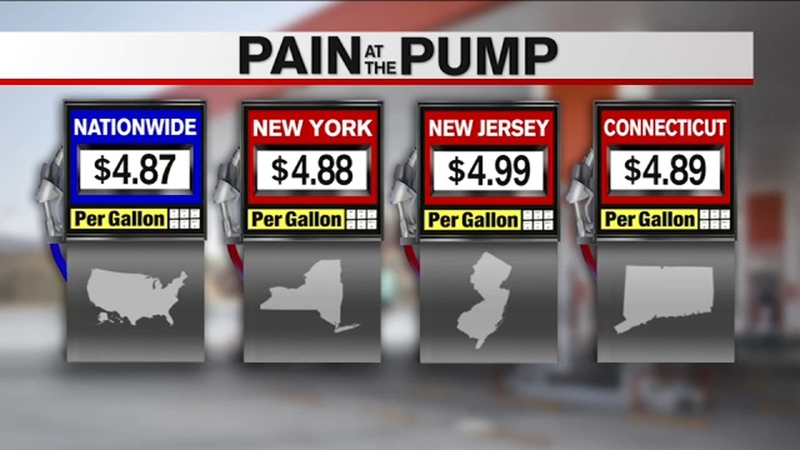 NEW YORK (WABC) -- Gas is now more than $5 per gallon on New Jersey's two main highways, as the pain at the pump continues across the nation.

The price of a regular gallon of gas jumped 19 cents to $5.07 on the New Jersey Turnpike and Garden State Parkway Monday morning, up from $4.88 on Friday.

Gas prices are readjusted three times a week on the two roadways, while AAA says the state average is now $4.99 per gallon.

But the price on the highways, based on a survey of prices at stations elsewhere in New Jersey, indicates that will also be shooting up in the coming days.

Analysts say the pent-up urge to travel has so far outweighed the skyrocketing prices at the pump for many consumers, but two-thirds of drivers recently surveyed said they would change their driving habits if gas hit $4.50 a gallon. Three-quarters said they would do so if it topped $5 a gallon.

Soaring gas prices across the country are out of the White House's hands, Transportation Secretary Pete Buttigieg said on ABC's "This Week" Sunday as he rebuked oil company executives for not upping production.

"I don't think it's correct to say it hasn't made any difference at all," Buttigieg said about Biden's decision earlier this year to release oil from the Strategic Petroleum Reserve. "This is an action that helped to stabilize global oil prices...We know that the price of gasoline is not set by a dial in the Oval Office."

"When an oil company is deciding, hour by hour, how much to charge you for a gallon of gas, they're not calling the administration to ask what they should do," he said. "They're doing it based on their goal on maximizing their profits."