WABC
BAY SHORE, N.Y. (WABC) -- The man charged in a deadly crash on the Southern State Parkway that killed a father and two children in Bay Shore was arraigned Thursday.

O'Neil Sharpe, Jr., 24, is charged in a 41-count indictment with vehicular homicide, DWI and leaving the scene after allegedly rear-ending a Toyota early on the morning of July 12. The Toyota burst into flames, killing 37-year-old Ancio Ostane, of Queens, and his two children, 8-year-old Andy and 4-year-old Sephora. Wife Lucnie Bouaz-Ostane survived the crash.

Sharpe, of Springfield Gardens, was arraigned on an indictment Thursday in Central Islip. Three of Sharpe's co-defendants also were been indicted and arraigned Thursday, including 23-year-old Demetri Stewart, who was arrested for picking up Sharpe and fleeing the crash scene.

Sharpe remains free on bond, while Stewart is being held on $100,000 cash bail on charges of leaving the scene, hindering prosecution and criminal facilitation.

Sharpe, who was arrested four hours after the crash at his mother's house in Rockville Centre, denies all the charges.

Prosecutors say a high-speed race led to the crash. It is believed that one of the men drove past Sharpe at 95 miles per hour, and when he tried to catch up at speeds up to 120 mph, he plowed into the back of Ostane's car, sending it over the divider and into the opposite lanes. Sharpe's estimated speed at impact was between 70 and 75 mph.

Prosecutors also said that Sharpe and others did nothing to help the victims once Ostane's vehicle crashed.

"At the time when dying people needed help the most, the defendants, some of them, literally stood by watching the Ostane family - children and dad - perish," District Attorney Tom Spota said.

Sharpe reportedly had a blood alcohol level of .06 four hours after the crash, indicating that at the time of the wreck, his BAC was .12. Sharpe's attorney maintains that his client was not drunk.

Prosecutors contend Sharpe had been at a party in Brentwood with several friends. They were driving back to New York City on the Southern State Parkway after 1 a.m. in three separate vehicles when two of the cars - Sharpe's and a car driven by Sheon Richards, 25, of Queens, began driving fast through traffic, Spota said.

Richards pleaded not guilty to reckless driving and other charges. His attorney noted that Richards returned to the crash scene and did not try to flee. 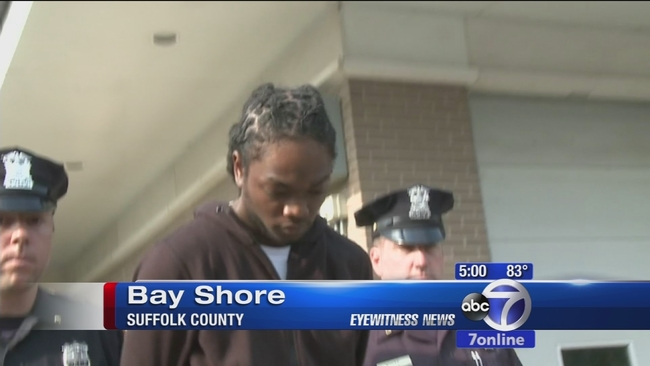