Exclusive: Theft of Christmas lights display in the Bronx caught on camera 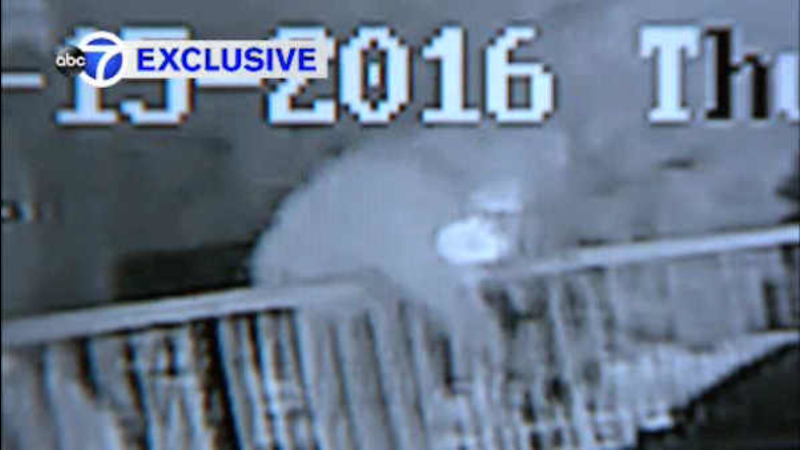 PELHAM BAY, Bronx (WABC) -- In an Eyewitness News exclusive, a surveillance camera was rolling when a laser light display of Christmas decorations was stolen in the Pelham Bay section of the Bronx.

The homeowner thinks he knows who did it.

"I hate to be the Grinch that stole Christmas, I know it's Christmas time but the man should be fired," said Wayne Gurman.

The man in the exclusive surveillance video who's probably as cuddly as a cactus and charming as an eel.

In this Bronx neighborhood where Christmas rules, where you'll find those popular laser projection lights, this year Wayne strapped one to his fence. The light creates red and green stars.

"It saves you hours of putting up lights," said Gurman. "It looked great, you can stop it, get the 3D effect."

But Thursday morning as Wayne was backing his car out of the driveway, he hit something.

Nope. Wayne looked at the footage and saw a car pull up, the newspaper delivery guys.

The driver gets out, throws two papers, one to his dad's house next door.

The passenger then tries to disconnect the device from the fence but it's zip tied. He tries ripping it off, but it breaks and shatters in several pieces.

"I don't get it, if it's broken what are you going to do with it, you're not going to sell it and the shocking thing is, it's a guy who has a job," Wayne said.

Wayne is justifiably annoyed and upset with this thief, but the other guy seen in this video, Wayne feels he is also to blame.

The younger me would say bada bing, but what would I say to this guy. I'd say are you kidding me, it's 2016, there are cameras everywhere," said Wayne.