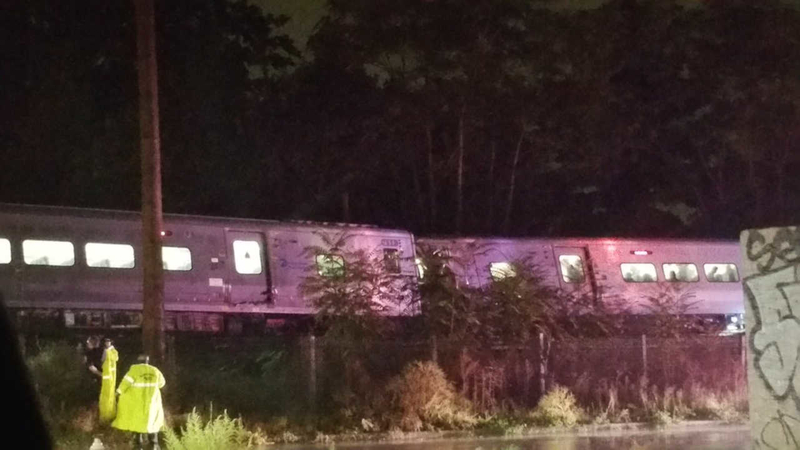 Governor Andrew Cuomo and officials got an up close look at the damage caused by three of the twelve cars derailing on Saturday night. The eastbound train ran off the tracks when it hit a work train, which was heading in the same direction on an adjacent track. Officials say it was the work train that sideswiped the passenger train.

"The work train was on the track closest to us, because the track was out of service. They were doing maintenance on the track, and one of the last steps is that piece of equipment going back and forth, and I think they had completed, and they were going to make a move east with all of the work equipment and clear up," said MTA Chairman Thomas Prendergast.

Passengers say the train was moving at a normal speed - an uneventful ride, when all of a sudden the impact was followed by panic.

"Everybody was screaming - everybody was going nuts," said passenger John Rooney, "It was a sudden jolt - train slid for about a hundred yards. Then, everybody just braced to see if anything else would happen. Came to a slow stop."

Governor Cuomo tweeted a photo after visiting the equipment operator in the hospital on Sunday.

Meeting with the family and medical team of a commuter injured during last night's @LIRR train derailment. https://t.co/J9NzW4HA3O pic.twitter.com/UkNMlc2WAg

"Frankly, that we didn't lose any life is something to be thankful for," Cuomo added.
The governor says crews will work all night long to make sure Monday's commute is as normal and as easy as possible. At a minimum, they want at least one track running. Monday is Columbus Day, so ridership should be lower than normal.

For the latest on the Monday commute, CLICK HERE.