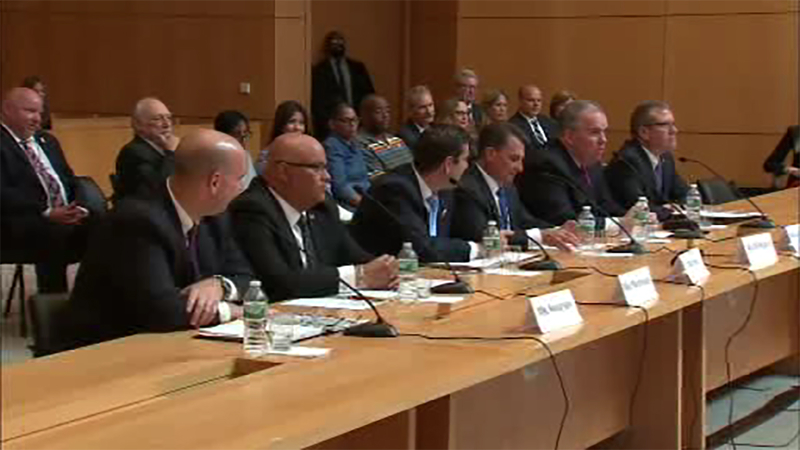 "They're kids killing kids... that needs to be stopped," Evelyn Rodriguez told a hearing of the House Subcommittee on Counterterrorism and Intelligence.

The mother of MS 13 murder victim testified before a congressional hearing on Long Island.

Defiant and determined, the parents of murdered Brentwood teenagers Kayla Cuevas and Nisa Mickens will not let their daughters be forgotten.

They came here to testify before members of Congress about what is actually happening in their communities, ravaged this year by the violent gang, known as MS-13.

There have been 17 murders in the past 16 months in Suffolk County. Bodies of missing teens were found barely recognizable.

Cuevas and Mickens, lifelong friends, were attacked and killed near their Long Island homes. Prosecutors say 16-year-old Kayla was targeted because of ongoing disputes with gang members at her school. They say 15-year-old Nisa was in the wrong place at the wrong time.

"My broad experience with MS-13 before Nisa's murder was like most people," said Mickens, who ran unsuccessfully for the Brentwood school board last month. "The old adage you never really know about anything until it affects you personally is very true."

The girls' alleged killers, who were arrested in March along with about a dozen other alleged MS-13 members, are facing murder charges that could result in the death penalty.

The Trump Administration is taking a hard line on MS-13, but It has also proposed historic cuts to the education department, and that came up at the hearing from the superintendent of Central Islip Schools where 4 teens were recently slaughtered by MS-13 members.

A panel of law enforcement officials from the local and federal level also testified at Tuesday's subcommittee hearing, and outlined a series of actions being taken to stem the violence, including increased patrols and arrests of suspected gang members locally and stricter enforcement of immigration laws.

"This hearing marks an important step in our efforts to improve the homeland security of the United States," said Rep. Peter King, chairman of the subcommittee.

"It's important to be targeting these gang members relentlessly and without the intelligence we can't so that," Suffolk County Police Commissioner Tim Sini said. "So collecting intelligence is the first step."