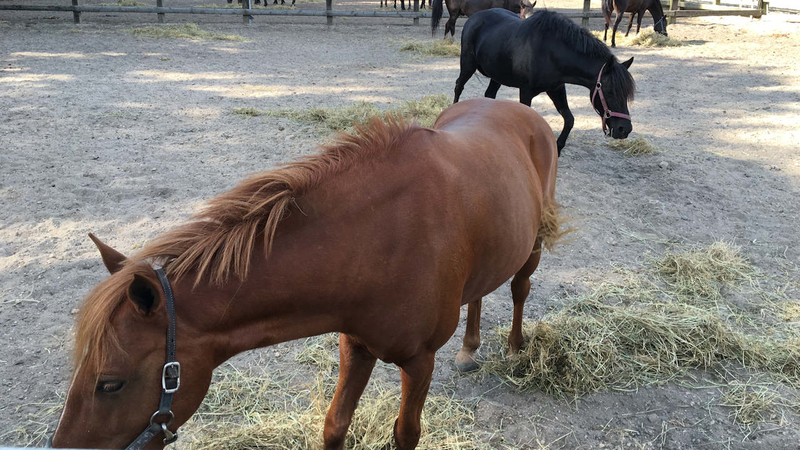 Parks officials received a tip of disturbed property in the area and began an immediate investigation in coordination with the New York State Department of Environmental Conservation.

A site visit led officials to believe that illegal dumping may have occurred, and the Suffolk County Police Department was notified. The area has since been sealed and is being treated as an active crime scene.

"It is clear from the visual inspection of what we have right here behind us, this is a crime scene," Suffolk Police Commissioner Tim Sini said.

Authorities say about 15 acres of the park is affected, and the riding center -- which has been in the location for 34 years -- has been shuttered until the investigation is over. Horse owners like Jessica Zirbes scrambled after learning of the news.

There are about 100 horses on the premises, and owners have been told they must move the animals.

"I have no choice, you know," horse owner Harvey said. "Everybody has to be out of here, probably by tomorrow."

Investigators only identified the dumping as "suspicious processed construction material" in dirt piled at the park, and no other information is expected to be released until further testing is complete.

"Obviously the material is going out for testing right now, so I don't want to comment further on what exactly the materials may be," Suffolk County Executive Steve Bellone said. "Except to say they seem inappropriate."

"Sweet Hills Riding Center has been providing first class equestrian programs at Suffolk County's West Hills Park since 1982. Recently, some material was dumped near a trail area without our knowledge or consent. The Center is cooperating fully with Suffolk County Parks and all of the agencies that are investigating this incident. At the County's direction, the Center is relocating horses to other facilities while testing is performed, but looks forward to submitting a plan to remove this material as quickly as feasible in order to resume the equestrian activities the riding community has come to enjoy over the years. The safety and enjoyment of its riders and the well-being of the horses on site have always been the highest priorities of the Sweet Hills Riding Center."