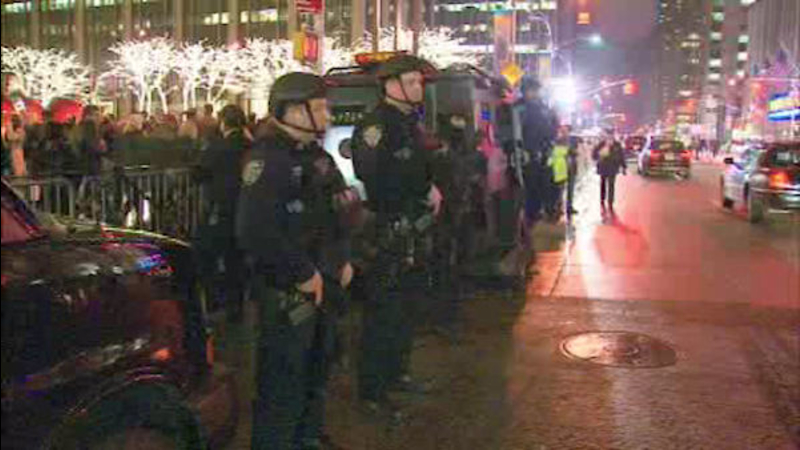 NYPD boosts security across city as a precaution

NEW YORK (WABC) -- The NYPD says that it is monitoring the mass shooting that killed at least 14 people in San Bernardino Wednesday, and that security remains stepped up around New York City in the wake of the Paris attacks and the recent shooting at a Colorado Planned Parenthood.

Security was already tight in the area around Rockefeller Center because of the annual Christmas tree lighting ceremony, and it appeared business as usual at Penn Station and other transit hubs where security measures are always extensive.

Holiday revelers ran a gauntlet of security checkpoints just to get anywhere close to the tree Wednesday night, but for Johnny Prendergrass and his kids, it was no big deal. They'd rather ditch a backpack alongside piles of abandoned umbrellas to join the thousands unwilling to miss the tree lighting at Rockefeller Center.

"It makes me safer than anywhere else. Because, um, nothing will really happen," Prendergrass said.

Since the terror rampage in Paris, police planners have worked overtime to retool their plans to protect this already high security event.

They had extra manpower from two brand new units of cops, armed to the teeth with tactical gear.

In fact security was so tight, when a city street sweeper made a wrong turn; cops stopped it and interrogated the sanitation worker inside.

"I don't think anyone in the country does it better than the NYPD. We did increase the security for tonight probably by about 15%. So you know, people should feel safe coming to any large event in New York City," said Chief James O'Neill, NYPD Chief of Department.

Cops said some 25,000 people filled up the pens all around the tree, some stood in the damp chill since early afternoon.

"We are in a society where you got to be careful," said Theresa Wiblishauser, a social worker.

Wiblishauser works in Newtown, Connecticut and is still reeling from the Sandy Hook shooting.

But not even the horrifying news from San Bernardino would keep her and her family from witnessing the dawn of a season of joy.

"Absolutely not. I would never live in fear of what's going on in the world, because those things are such a slim chance. And if you live in that world of like, where you fear things, you just can't live," Wiblishauser said.

Officials say there is no active or credible threats facing the city, and Eyewitness News is waiting for more information from the NYPD if additional measures are being taken in light of the California incident.

Outside the city, Nassau County Executive Edward Mangano and Acting Police Commissioner Thomas Krumpter announced they are intensifying patrols and will stay vigilant in protecting residents.