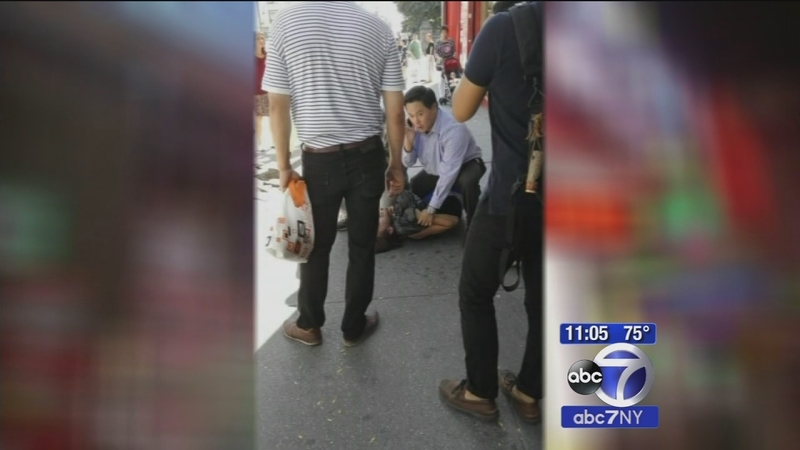 FLUSHING, N.Y. (WABC) -- A New York State assemblyman from Queens was walking down the street when he saw a woman being robbed.

The assemblyman played high school football in the Bronx and college football upstate, and it served him well Thursday.

"It was a crazy day," State Assemblyman Ron Kim said.

It was a crazy day for two-term Assemblyman Kim who found himself redefining the term constituent service, detaining a would-be purse snatcher on a busy Flushing sidewalk.

Moments earlier, he'd turned the corner as a woman with an infant was trying to chase the man down.

"I have a nine month old baby and all I could think was my wife walking the streets every single day and it happening to her," Assem. Kim said.

The man ducked into an office building, and for a moment Kim lost him and got on the phone to call 911.

But then, a Good Samaritan spotted the suspect, now wearing different clothes, and he charged up Main Street.

The assemblyman was still on the phone with police as he tackled him.

He says it's given him real-life insight into key policies to enact in Albany.

"It was obvious, I think he had a mental problem, and I do feel that we should definitely make an effort to make sure individuals like him get the help that they need and get them off the streets," Assem. Kim said.