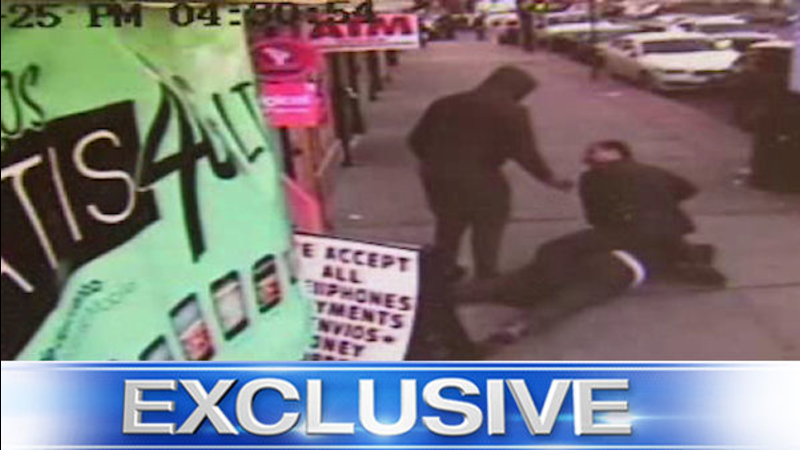 PATERSON, N.J. (WABC) -- A Paterson Police officer was in serious need of back-up when he walked in on a hold-up in progress at a cell phone store.

Video of the intense situation shows the lone officer trying to takedown four suspects, one of them who had a gun.

"I was afraid he was going to grab my gun. And I keep telling him, 'Stay back, stay back,' and hoping that my last transmission went through," said Officer Jaime Mejia, of the Paterson Police Department.

Officer Mejia says after three decades on the job, his instincts just kicked in.

It was just before 5 p.m. Wednesday, when Mejia responded to the call of four individuals inside a cell phone store on Park Avenue who were threatening to shoot store employees.

One of them was wearing a mask.

He tells the suspects to get their hands up against the wall, and that's when things got dicey.

"One of the suspects decides to go out of my sight, and go behind this sign here, that drew my attention," Officer Mejia said.

That's when Mejia noticed that suspect pulling something out of his waistband and hiding it in a box.

Mejia pushed him away and spotted the handgun.

But while Mejia was distracted, one of the suspects bolted.

The outside camera showed him taking off running.

A second suspect then tried to follow, but Mejia tackled him.

They ended up outside.

Meanwhile, you could see one of the other suspects get close enough to grab the officer's weapon.

Moments later, help arrived but it wasn't over.

"At this point I have in mind that there's a gun in the store that I witnessed and the threat is still there," Officer Mejia said.

But while Officer Mejia and his backup were struggling to detain the suspect outside, store employees inside were making sure the other suspects didn't grab that weapon stuffed inside that box.
Police found a 45-caliber handgun, with one round in the chamber, and illegal extended magazine, with hollow point bullets.

Officer Frank Toledo was one part of the backup.

He says not every cop would have gone into that store alone.

"He's the guy that the younger guys, the junior guys and the rookies, they look up to," Officer Toledo said.

Police say the suspect found with the gun is 18 year-old Delshawn Wright.

Police say they also found 100 bags of heroin on him.

In addition, Wright is wanted for a shooting three days earlier.

Meanwhile, there is a fourth suspect who is still on the run.