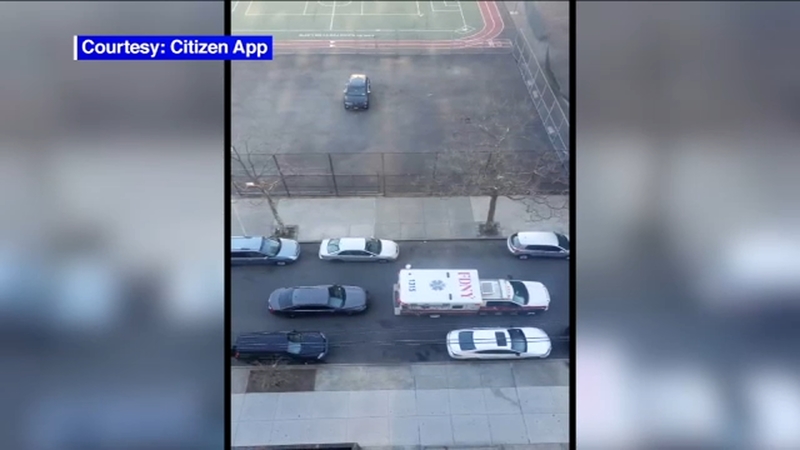 NEW YORK CITY (WABC) -- Gun violence continues to surge on the streets of New York City, even as the NYPD's new Neighborhood Safety teams fan out across targeted parts of the city.

On top of 29 shootings from over the weekend, police were investigating seven more Monday evening.

Five of them came within a 7-hour period, including a broad daylight shooting around 3 p.m. in Coney Island that left a 7-year-old girl wounded.

Police say she was walking with her mother on West 30th Street when they were caught in a crossfire, and the girl suffered a graze wound.

The NYPD will deploy five more of its anti-gun teams to some of the city's most violent neighborhoods.

Detectives believe the gunfire is gang related, a dispute between rivals in Coney Island and Gravesend. The shots were fired from a dark vehicle with tinted windows caught on camera stopping at a traffic light at West 30th Street and Surf Avenue.

As the vehicle started moving, the front passenger window rolled down, and shots were fired in the direction of three men running from the scene as the car continued westbound on Surf Avenue. That vehicle has since been recovered in Gravesend.

One of three men who fled on foot has been identified as a gang member from Coney Island who is being sought for questioning. Three shell casings and two bullet fragments were recovered at the scene.

It was just after school when children and their parents in the crowded Seabreeze Gourmet Deli nearby heard gun shots and ran for cover.

"It's just crazy," employee Anthony Wittman said. "It's getting crazy with all of these shootings."

He had just gone outside to smoke a cigarette when the gunfire rang out.

"Car rolled by, and they just started shooting and everybody just scattered," he said. "God forbid, anything could happen. She could've got killed."

There were seven victims in the seven shootings Monday night, and so far this year, there have been 260 shootings with 291 victims.

The teams, in uniform but driving unmarked cars, are focused on getting guns off the streets and are an updated version of the NYPD's controversial Anti-Crime Unit -- which was disbanded under former Mayor Bill de Blasio.

"We've done it right," Adams said. "We have the training right, we did the recruitment correctly, we interviewed, we vetted. We did everything that was needed to learn from the past, to produce the product I committed to."

"These units have a culture and such a specific focus that they treat the civil and constitutional rights of the communities that they police as collateral damage in their hunt to get guns," said Molly Griffard, of the Legal Aid Society.

After only two weeks, the initial neighborhood safety teams have made 31 arrests.

Ten of those were for gun possession.

Of Monday's shootings, two happened in precincts where the new teams have been deployed.