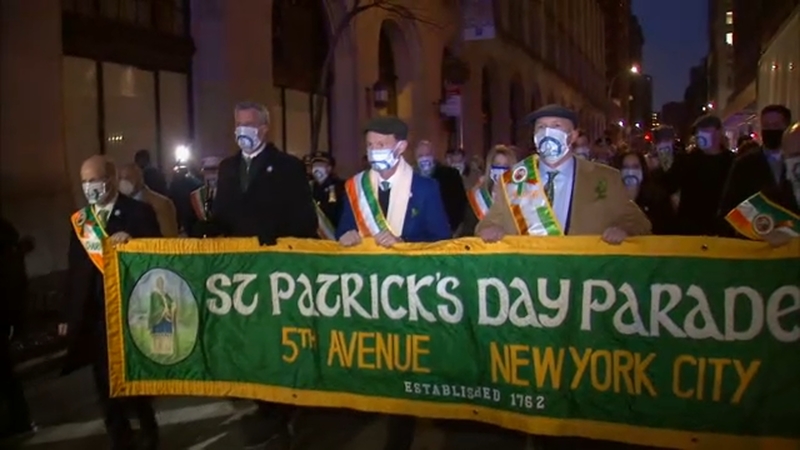 MIDTOWN MANHATTAN (WABC) -- Millions around the nation are celebrating St. Patrick's Day Wednesday, the second in a row to be dramatically altered by the coronavirus pandemic.

St. Patrick's Cathedral is open at 25% capacity, but Masses were once again being live-streamed.

The annual celebration of the patron saint of Ireland was not held in person last year either, as the pandemic began to shut down New York.

"It's beautiful," he said. "It's not what we all want. We want everyone back. We want millions of people lining the parade route, but this is still beautiful, a tradition, way over 200-year-old tradition, kept alive and we're going to make the handoff next year to the full parade again."

Eighty-nine-year-old New Yorker Bob Holzman received his COVID-19 vaccine as soon as he could, hoping it would allow him to get back to his favorite activity, dancing.

A small but significant group of marchers in this year's parade included first responders and essential workers, two groups that the parade honored to mark the ongoing pandemic and the 20th anniversary of the September 11th attacks.

"We're so happy to be here today to celebrate St. Patrick's Day and to honor this New York institution and more importantly to honor all the first responders and essential workers," said Hilary Beirne, Chairman, St. Patrick's Day Foundation. "We are in essence, the sign of a new beginning."

The tradition dates back to 1851 when the battalion was asked to lead the annual parade of Irish Catholics in case of anti-immigrant violence.

This year, members of the Fighting 69th arrived at St. Patrick's Cathedral at 7:45 a.m. and were greeted by Cardinal Timothy Dolan.

For the second year in a row, the parade is not welcoming crowds, but the tradition continued.

Irish pubs and restaurants are certainly looking forward to Wednesday night, though authorities said enforcement of capacity restrictions would be strictly monitored.

He remembers closing his doors on St. Patrick's Day eve, and this year, he's counting his blessings.

"I feel like I'm ripped off here, with an Irish police commissioner and two St. Patrick's days, and not one parade, this is a joke," he said. "We will be out there. We expect some of the restaurants probably to have some more people. We will be out there throughout the city, making sure everyone is safe all the way around."

Restaurants had just shut down last year the night before St. Patrick's Day.

The capacity increase will only help business at the Irish Coffee Shop, which Amanda Doherty and Muredach Hegarty bought last January.

"Last year, we just had to-go food," Hegarty said. "Everyone was nervous and scared. There weren't people out at all.

But now, there's a sense of hope served alongside Irish soda bread and corned beef.