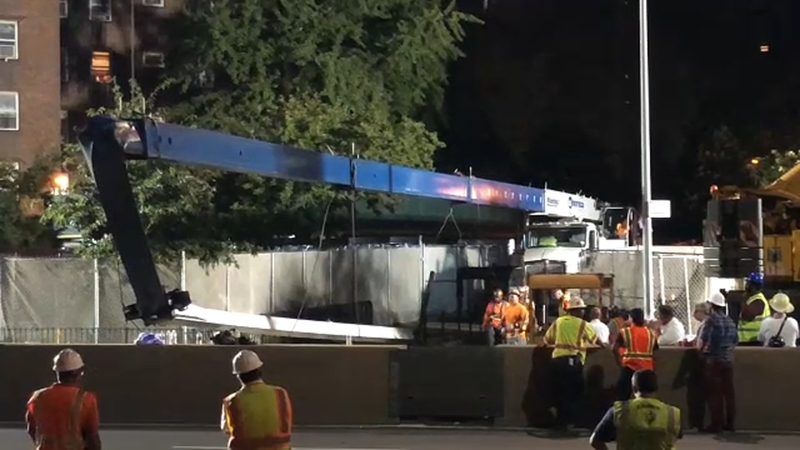 NEW YORK (WABC) -- The New York City Buildings Department has stopped all crane work across the city by the company responsible for an incident at a NYCHA building last month.

United Crane and Rigging is the firm identified as responsible for the July 30 incident at the NYCHA building on FDR Drive.

The DOB's investigation revealed the crane lifted a load of steel beams that weighed more than 4,400 pounds -- which exceeded the crane's permitted lifting capacity of 3,700 pounds. The load of steel was supposed to be placed on top of the building to support future mechanical equipment.

"As soon as we got to the site, and saw who it was, we immediately started taking action about how we were going to handle that investigation," said DOB Deputy Commissioner of Enforcement Tim Hogan.

The DOB says the total load weight caused the crane's boom to bend and partially collapse. The collapse of the boom caused the operator to lose control of the load which struck the roof and side of the building before falling to the ground.

The DOB issued five violations Monday to United that carry penalties of $110,000. The violations include failure to designate a qualified and competent lift director; failure to make proper notifications to DOB regarding the work that was being performed; inadequate safety measures on site; failure to safeguard the construction site to protect workers and the public and failure to have proper construction documents on site.

The DOB's order will remain in effect until the company replaces the personnel who supervised the crane work at the location of the incident as well as 21 other locations.

The DOB is also demanding an independent monitor to make monthly safety compliance reports to the DOB.

United was also involved in a fatal accident on April 13 on Broome Street earlier this year. In that incident, the counterweight of a crane that was being assembled under United's supervision fell to the ground and killed a worker.

"The engineer, the master rigger, the crane company, the lift director were all the same people, and the crew that was involved in both of these incidents were significantly almost the same people," Hogan said. "They've got two strikes, we don't want a third, we're doing everything we can to protect the people."

The Broome Street incident remains under investigation by the DOB and other agencies.