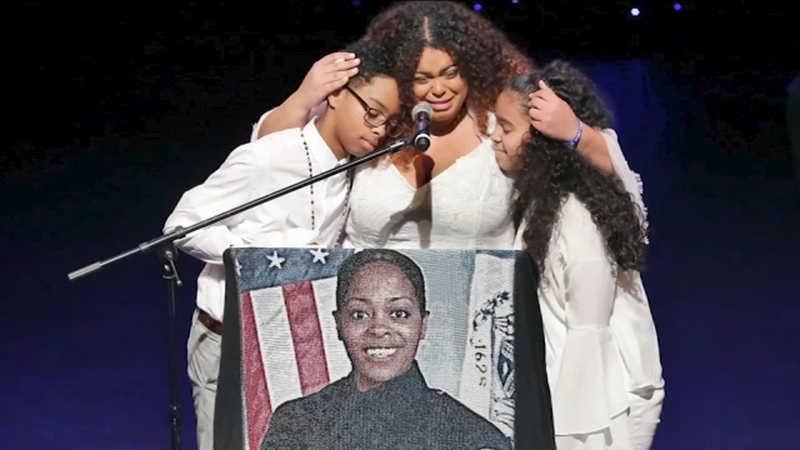 FORDHAM, Bronx (WABC) -- It's been nearly five years since NYPD officer Miosotis Familia was murdered while sitting in her patrol car, leaving behind her three children, who have not been able to receive any of her pension.

As the fifth anniversary of her mother's death approaches, Genesis Villela says she's keeping her promise.

"I made a promise to my mom that I would take care of my brother and sister," Genesis Villela said.

She's the sole guardian of her siblings, 17-year-old twins Peter and Delilah.

"I love my brother and sister like my own children," Villela said.

It has been pressure filled role after her mother, NYPD Detective Miosotis Familia, was gunned down on the job in 2017, leaving Villela to raise her siblings with no financial help.

"I was cut off the pension, I needed to be a student to be able to receive my mom's pension until 23, but I had to drop out of school to take care of my brother and sister when she was killed," Villela said.

Now the 25-year-old is fighting for her mother's state pension, money that she says spouses and parents of first responders who die in the line-of-duty have no restrictions obtaining.

"To have these people control my mom's money when I want to take care of my brother and sister," Villela said.

She said just to fill out the court paperwork is humiliating and an invasion of privacy.

Police Benevolent Association President Pat Lynch supported her saying, "our city's obligation to the families of our fallen heroes has no expiration date."

Villela said she wants this to change.

Even with the ups and downs, she stands at the 46 Precinct where her mother worked -- and no matter what, there's that promise.


"She asked me to take of my brother and sister," Villela said. "I'm keeping my promise to her and because I love her."