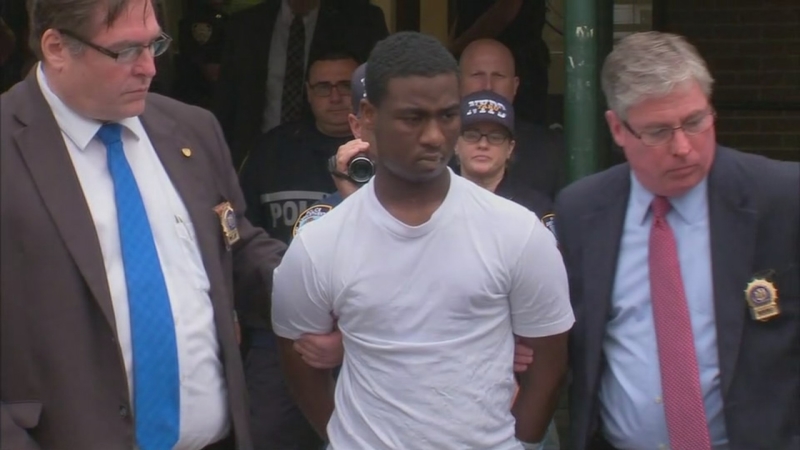 EAST FLATBUSH, Brooklyn (WABC) -- A 15-year-old accused of hitting then dragging an NYPD officer while behind the wheel of a stolen car in Brooklyn was arraigned Friday.

Justin Murrell, 15, of Brooklyn, is charged as an adult with second-degree attempted murder and first-degree assault.

The hearing was in Brooklyn Supreme Court before Justice Dineen Riviezzo. Police officers from the 67th Precinct where the hurt officer worked, packed the courtroom for the arraignment.

Murrell was ordered held without bail and will be back in court Aug. 22. He faced a maximum sentence of 10 years in prison if convicted.
Watch: Video from inside the courtroom:

A packed courtroom as a 15-year-old accused of dragging an NYPD officer faces a judge.

Officer Dalsh Veve, 35, was critically injured around midnight June 4 when a driver he was questioning in a possible shooting took off, authorities say.

Veve was dragged for 2 1/2 blocks in East Flatbush, until he eventually became free and fell onto the street.

The vehicle continued for a short distance before it crashed and was abandoned on East 53rd Street. Veve discharged his weapon twice while being dragged, and the suspect was shot, "most likely" by Veve, according to the New York City Police Department.

Murrell was treated at Brookdale University Hospital, where he walked in with a gunshot wound to the face.

Police said the black Honda Civic that he was driving was stolen from a person delivering a pizza in Valley Stream on Long Island May 16.

Veve remains in critical condition at Kings County Hospital. He has severe head trauma, according to the Brooklyn District Attorney.

He is "still very much fighting for his life," said NYPD Commissioner James O'Neill shortly after the incident.

Murrell has a long history of run-ins with the law with 11 prior arrests, including one most recently for grand larceny in May.

Veve has been with the NYPD for nine years. He is married with two children.

PBA president Patrick Lynch said in a statement, "We will do everything in our power to ensure that this dirtbag never has the opportunity to harm another NYC police officer or citizen of again."