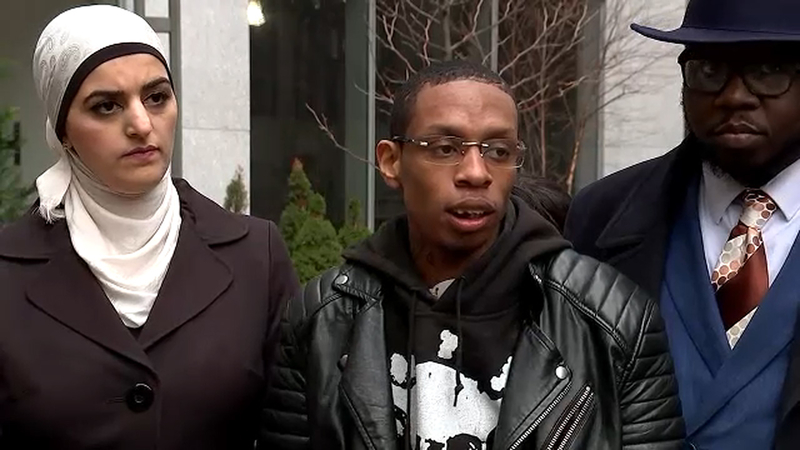 EAST NEW YORK, Brooklyn (WABC) -- A man who was shot in the face by an off-duty NYPD sergeant during a dispute in Brooklyn last year says he wants to know why the gunman is just getting away with a slap on the wrist.

Thavone Santana was shot in the mouth last August in East New York after a dispute with Ritchard Blake over a cellphone charger.

A grand jury indicted Blake last week on a charge of tampering with evidence after surveillance video apparently showed him trying to plant his own knife on Santana's body after the shooting.

But the grand jury declined further charges after determining the shooting itself was justified because the victim had his hand in his pocket and had previously motioned as if he had a weapon.

After several surgeries, Santana is still in excruciating pain. He struggles to speak and has a tracheostomy.

"Since I was shot, I've been having severe pains in my face," Santana said. "My face is messed up. I got a bullet stuck in my neck. I can't eat proper food. I can't swallow. It's just painful."

The Brooklyn district attorney has agreed to meet with Santana and his lawyers.

Blake has pleaded not guilty.

He was fired by the police department soon after the shooting.

Still, community activist Rev. Kevin McCall says he has no faith in the grand jury process, pointing out Blake was not indicted on either assault or attempted murder charges.

"It should be open process so people can give their opinions and see the facts of the case," he said. "So grand jury should be open. It's a secret process."

In a statement released to ABC News, Blake's lawyer said that the former police sergeant acted in self-defense.

"It's tragic that Mr. Santana was shot and injured, but unfortunately, it was this known gang member's own menacing actions of chasing Mr. Blake in the middle of the night and motioning as if he had a gun in his pocket that caused Mr. Santana to be shot in self-defense," attorney Abe George said.

Rev. McCall, who has been acting as a spiritual adviser for Santana and his family, refuted the claim that Santana has any gang affiliations.

"He is absolutely not in any gang," McCall said. "They're trying to discredit someone when they police thinks they are the victim. This is a clear cut case of a cop gone rogue, that's it."

The pre-dawn shooting allegedly occurred after Santana knocked on Blake's girlfriend apartment door seeking the return of his phone charger, which he claimed in the lawsuit he had lent to the woman earlier in the evening.

"Sgt. Blake opened the door and appeared inebriated," according to a federal civil lawsuit filed in January against the city, Blake and other unnamed NYPD officers. "He began cursing and screaming at Thavone for knocking on the door at 4 a.m."

Santana left the building to purchase another charger from a nearby convenient store, as Sgt. Blake followed "within steps" behind him and shouting for Santana to "stay away from his girl," according to the January lawsuit.

The lawsuit alleges that even though Santana assured the 41-year-old officer that he "wanted nothing to do" with his girlfriend and "was just trying to get his charger back," Blake opened fire, according to the lawsuit.

After the shooting, Blake told fellow officers that Santana tried to rob him and that he was acting in self defense.

As the ambulance transported Santana to a nearby hospital, police placed him under arrest and handcuffed him to the stretcher, a source familiar with the case told ABC News.

The following day, surveillance video near the scene allegedly told a different story.

As the pair were just feet apart from one another, Blake pulled out a gun and shot Santana, before attempting to "cover up his actions" by taking "knives out of his back pocket and plant(ing) them" on the bleeding Santana's body, according to the lawsuit and the video footage.

Blake allegedly leaned over to pick back up the object he threw onto Santana and said "I should've killed you," a source told ABC News. A razor blade was later found next to Santana.

According to the lawsuit, Blake has a history of violence.

"Sgt. Blake has a prominent and long history of violence, assaults and was the subject of Internal Affairs investigations of his actions in 2010, 2011 and 2016 and was disciplined for his violations of NYPD Policies."

Once the surveillance video surfaced, an internal investigation ensued and Blake was fired from the force.

"If the NYPD can fire him, then the district attorney can charge him," Rev. McCall said. "The family wants this officer behind bars, no community service, no fine to pay, but jail time."