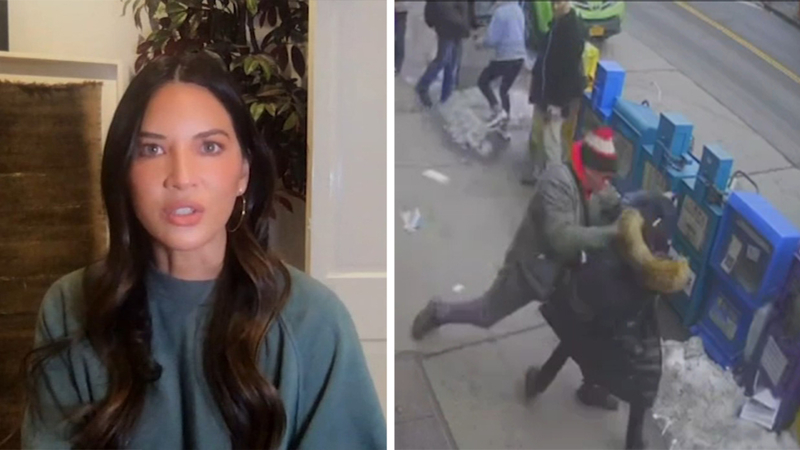 FLUSHING, Queens (WABC) -- Actress Oliva Munn credited the NYPD and "everyone on social media who cared" with identifying the suspect who shoved her friend's mother during an assault at a Queens bakery earlier this week.

"I love the internet today," she said during an appearance on CNN with longtime friend Sam Cheng, whose mother was pushed to the ground on a Flushing sidewalk.

Cheng said the attack is not being treated as a hate crime, which is one reason he is speaking out is so people understand the difference.

"We can't technically, legally, call it a hate crime, I believe," he said. "And I wonder how many more other crimes out there that they legally can't be called hate crime? Just want to spread the awareness there."

The suspect, Patrick Mateo, was charged with third-degree assault and second-degree harassment.

"We don't tend to report a lot of these things, we tend to take it on the chin and keep going," Munn said of the Asian American community. "When we ask people for help, we say we need help to feel safe in our country, to be safe in our country. What you saw yesterday and in the last couple days (is) that people care."

The incident happened just before 2 p.m. Tuesday on Roosevelt Avenue, where authorities say the man began screaming at the 52-year-old victim and threw a box of spoons at her.

"Get the (expletive) out of my way," he allegedly said before pushing her to the ground.

She fell and hit her head against a newsstand box and was rushed to New York-Presbyterian Queens in stable condition.

Surveillance video shows the violent attack outside a bakery in Queens.

The criminal complaint said she lost consciousness, and Cheng said his mother needed about 10 stitches to close the gash down her forehead.

Witnesses said the suspect was cursing at the victim moments before the shove.

"The guy just peeped out of the coffee shop, and he goes, 'I'll eff you up,'" witness Derrick Chan said. "And then all of a sudden, he comes out and tosses a box of spoons at her. And then just does a football sack and pushed her to the ground."

Young women in Florida arrived at a vaccination site "dressed up as grannies" in bonnets, glasses and gloves in an apparent attempt to qualify for COVID-19 vaccination but were turned away, a Florida health official said Thursday.

Mateo was arraigned and released with supervision. No return court date has yet been set.

He was arrested by police who arrived at his home Thursday morning and reportedly told the officers "he knew why the police were there because someone had sent him the pictures from social media."