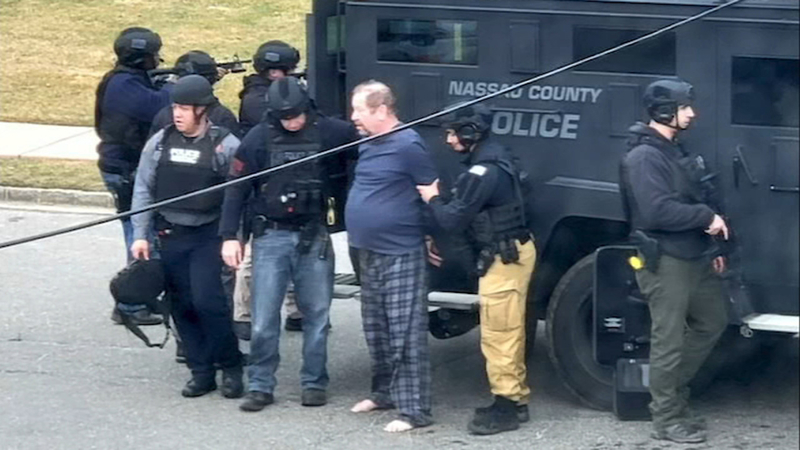 MASSAPEQUA, Long Island (WABC) -- A dentist on Long Island is under arrest after police say they found dozens of loaded guns and thousands of rounds of ammunition in the basement below his office.

Paul Carey, who lives in the house above his Massapequa dental practice, is now facing a slew of charges.

Police say many of the weapons were so-called ghost guns, illegal and assembled from various parts of other guns that can't be traced.

Nassau County police raided the home just before 2 p.m. Wednesday, after a 33-year-old woman who works at the dental office called them.

She said the 62-year-old Carey called her name out multiple times before she approached him, and when she looked up a staircase to the next floor, she saw him in possession of a handgun.

"While he appeared to be agitated and intoxicated, he went upstairs and his secretary heard him racking a rifle a shot gun," Nassau County Police Commissioner Patrick Ryder said. "She ran out of the house. called 911. We responded."

Carey was arrested without incident and transported to an area hospital for evaluation.

You can hear officers yelling at Carey to walk closer to them from his front door.

"That's the only way this is going to get done," an officer yells.

You can hear Carey grumbling back at police.

During the investigation, police say he was found to be in possession of 20 illegal long guns, 18 of which were "Ghost Guns." He also had seven silencers, 61 high capacity magazines and approximately 3,000 rounds of ammunition.

Police believe he made the ghost guns by buying the parts through the mail from around the country and said he had a machine shop in his basement. Most of the guns were loaded, officials said.

Carey is charged with first-, second- and third-degree criminal possession of a weapon.

It's not Carey's first run-in with the law. Authorities say he was a licensed pistol holder until December of 2012, after it was determined that he had fired rounds in his backyard.

He was charged with reckless endangerment and also has arrests in 2020 and 2021 for DWI.

Neighbors said two years ago Carey was drunk and drove right into someone's house in the neighborhood.

Neighbor Jennifer Sciscioli said they have heard gunshots going off in their neighborhood for years.