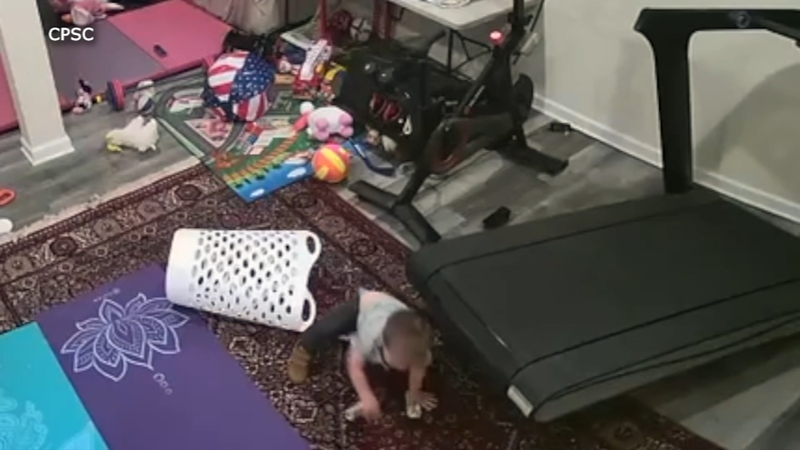 The Consumer Product Safety Commission published a release Saturday, noting that it is aware of at least "39 incidents," including a death reported in March and injuries to small children and a pet.

The CPSC stated that children and pets can become "entrapped, pinned and pulled under the rear roller of the product," posing risk for "abrasions, fractures and death."

The agency released a video showing how a child can get pinned underneath the exercise machine but warned that this video may be disturbing to some viewers.

Locking the Tread+ does not necessarily prevent injury either, as at least one incident occurred when a parent was running on the treadmill, according to the CPSC.

Peloton blasted the CPSC in a release Saturday, calling its warning "inaccurate and misleading." Peloton said there's "no reason" to stop using the machine if safety instructions, such as correctly using its safety key, are followed. It also said that the Tread+ should be kept away from children under 16 years old and pets "at all times."

Specifically, Peloton took issue with the video released by the CPSC. The company said that if the treadmill's safety key had been used properly, that could have avoided the "kind of incident that this video depicts."

"The Tread+ includes safety warnings and instructions in several places, including in the user manual, in a safety card left on top of the Tread+ tray on delivery, and on the product itself," Peloton said.

Overall, exercise equipment as a category can be particularly dangerous for children: 25,000 kids under the age of 10 are injured by exercise equipment each year, according to a 2014 study from the US National Institutes of Health. In 2019, the CPSC estimated U.S. emergency departments treated 2,000 treadmill-related injuries in children under 8.

Peloton's Tread+, which costs $4,295, features carbon steel and aluminum as well as a motorized belt for walking or running. The company recently revealed a lower-priced treadmill for $2,495 that's expected to ship in late May. Both have large screens to stream Peloton classes.