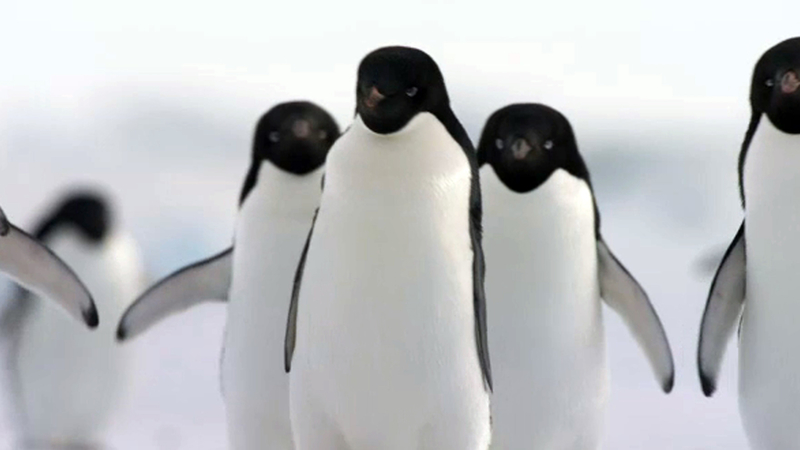 NEW YORK (WABC) -- For more than a decade, Disneynature has made wildlife documentaries released in time for Earth Day each year. The latest in the series called, "Penguins," opens Wednesday.

Antarctica is one of the most forbidding places on Earth: a continent the size of Europe, where temperatures go down past 100 degrees below zero, and winds can blow 150 miles per hour. Near the South Pole, it stays dark six months of the year!

Adelie penguins call this place home, and one in particular, named Steve, is given life by narrator Ed Helms. Like the actor, Steve is a new dad. His trials and tribulations are most amusing.

"Penguins are just comic," said Dr. Jane Goodall, Disneynature's ambassador. "It's the way they walk, which of course is the only way they can walk, but it makes you smile. You can't help it, and then suddenly they'll come to a nice, smooth piece of ice, and they'll just barrel down on their tummies."

Filmmakers can spend several days getting one single shot.

"You have to be patient to get the kind of behavior that you actually want," Dr. Goodall said. "You know, you can't direct the animals to do what you want them to do when you want them to do it, so you just have to wait, and I know about that only too well."

Dr. Goodall is best known for her work in Africa, where she became famous for studying chimps. Now she's promoting "Penguins," in part, to alert kids and their parents to the dangers of global warming.

"The sea ice is breaking up earlier and earlier," Goodall said. "The greenhouse gasses are increasing, trapping the heat of the sun and causing changes in weather patterns all over the world. We must take action before it is too late."

That is why Goodall still travels more than 300 days a year, even though she just celebrated her 85th birthday.

"There's no time to reflect," she said. "You just have to move on!"

A portion of the proceeds from the first week's box-office receipts for "Penguins" will be donated to help preserve penguins. The documentary is from Disneynature, owned by the same parent company as ABC7.