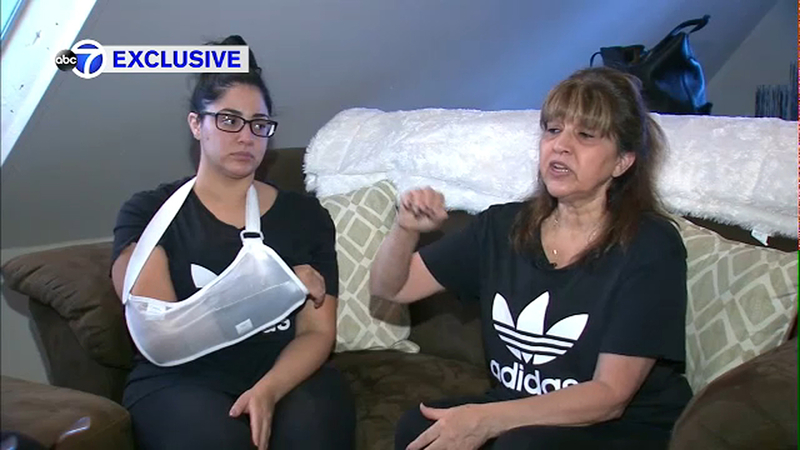 THROGS NECK, Bronx (WABC) -- In an Eyewitness News exclusive, a woman in the Bronx says her family is living in fear because of a vicious pit bull in their building.

After two attacks in two years, the family wants to know why police aren't doing anything to help. They say they don't leave the house without a large stick or steak knife in their pocket

Back in December of 2016, Jo-Ann Salazzo says she was bringing three of the family's small dogs home from a walk when the neighbor's pit bull attacked in the first floor hallway of the building, puncturing the lung of her 6-year-old Maltese named Baby, killing it.

And just ten days ago, the family says the same pit bull attacked again, this time as JoAnn's daughter Danielle Caggiano headed out to walk one of their pets.

Danielle suffered several deep puncture wounds to the arm and was in the hospital for two days.

"I ripped off my jacket, the blood was everywhere like a horror movie, pouring out of my arm," she said. "I wrapped it up real quick, waited for the EMT's to come."

"I couldn't even have my Thanksgiving here," said Jo-Ann. "My grandson, my son, my daughter-in-law was expecting again, they wouldn't come which I wouldn't want them anyway. I couldn't put them through that. My grandson's a little more than two years old, I wouldn't want him coming here."

And even though they filed incident reports with both police and the New York City Health Department animal bite unit, the dog has still not been removed from the property.

An NYPD spokeswoman released the following statement: "If police determine that no criminality was involved, such as animal abuse or assault, the incident will be treated as a civil matter."

The Health Department says it is investigating the incident and will be pursuing enforcement action against the owner.

Eyewitness News attempted to speak with the dog's owner but received no comment.