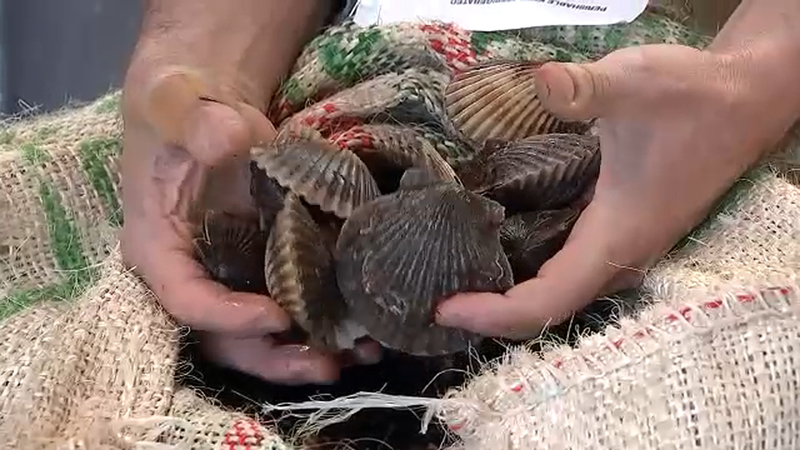 PECONIC BAY, Long Island (WABC) -- Restaurants and fishermen across the Tri-State Area that are facing a maritime mystery -- a massive shortage of scallops.

More than 90 percent of the shellfish in Peconic Bay off Long Island have died this season, and with the severe shortage, prices for the delicacy are soaring.

The scallops they are pulling in are healthy, but they represent only a tiny fraction of what baymen would normally pluck from the waters.

"I want to say a 100th of what we'd normally have this time of year," said Keith Reda, of Braun's Seafood Market.

At Stony Brook University's School of Marine and Atmospheric Sciences, Stephen Tomacetti is one of the researchers,trying to find an answer for the massive die-off.

He designed what he likes to call the scallop FitBit back in 2018, collecting data through the device with eight ports placed onto scallops and into the bay that measure the effect of climate and water conditions on the scallops using infrared light.

"And every time a scallop heart beats, the amount of reflected infrared light that sensor detects changes," he said.

What he found was that scallops were often most vulnerable after spawning, when their energy reserves are weak.

His theory is that if hot weather occurs during those weak moments, heart rates can shoot up to deadly levels.

And it wasn't only the extreme heat from last summer they suspect played a role, but also the changing of the temperature dramatically over a short period of time.

Each sudden spike also shows a spike in the heart rates, and now, the price has certainly spiked as well. At Braun's, bay scallops retail for $39 per pound right now -- more than twice the normal price.

So millions of dollars are at stake.

"I'd love for someone to say, 'Yeah, this is definitely what happened,'" Reda said. "Unfortunately, I don't think there's that person out there. She's bigger than all of us."

For now, only a handful of baymen are making a go of it.

"Making a day's pay only because of the price," bayman Pete Winters said. "If the price wasn't high, it wouldn't even be worth going."

Now, researchers are trying to predict what critical answers the waters hold for next year.

This story is part of our "Accuweather Alert -- Ready for Winter" special hosted by chief meteorologist Lee Goldberg that will air Saturday, Dec. 14 at 7 p.m. on ABC7. CLICK HERE for more on the special.