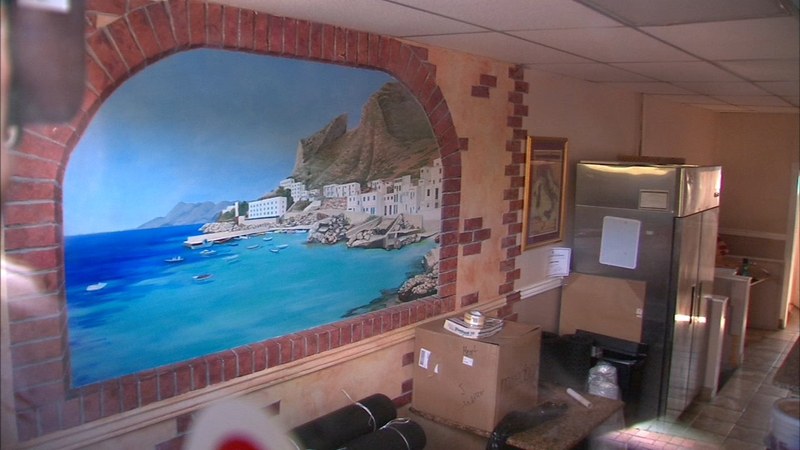 NEW JERSEY (WABC) -- An artist from New Jersey says she's out hundreds of dollars for work she did painting a large mural in a local pizzeria that has since closed down.

And while the restaurant owners claim they're broke, 7 On Your Side found photos telling a very different story.

Marcine Kiessling's worried. This is her son Devon. He relies completely on his cochlear implant to enable him to hear. But Marcine says she can't get the money to pay for her son's treatment - because she's owed hundreds by a local merchant.

"I was furious. I wasted my time," said Marcine.

She's talking about the hundreds she's still owed on this contract - originally worth $2,200 for painting a faux finish and this mural of scenic Sicily.

"I started in December. I worked very hard," said Marcine.

it took Marcine 90 hours to finish the job, which she did rushed to complete before Christmas Eve.

The pizzeria owner even posted on his restaurant's Facebook page, "Hats off to you Marcine, awesome job."

But the artist says Steve and Brittany DiGiorgio paid her the compliment, but didn't pay her the balance she's owed.

"He said I'll contact you when I get back from vacation," said Marcine. "After that, the payments stopped."

Marcine's mural is still on the wall here at the Keyport pizzeria. But the DiGiorgios shut the business down, and stopped paying her in January. In June she took the owners to court and won a default judgment for more than $1,500. But she still hasn't seen a dime.

"He says come open the cash drawer. I have no money," says Marcine.

But the wife's (and pizzeria co-owner's) Instagram account tells a different story. In February, a month after Marcine partial payments stopped - the couple's hopping a jet to Punta Cana. In April, lounging on the beach in Turks and Caicos. Then August, relaxing in Ocean City Maryland. And just weeks ago, Brittany's bragging about this bling, a multi-carat diamond ring for her anniversary. #Huge.

"I just don't understand why he would act this way," said a head-shaking Marcine. We agree, so we went looking for answers.

The DiGiorgios announced on Facebook they were opening a new pizzeria in this Hazlet, New Jersey strip mall.

But on this day, we found no one was there working.

And no one answered the door at the 3,600 square foot sprawling New Jersey home, that Steve told us Brittany owns.

"It's really not that much money," laments Marcine.

When we reached Steve DiGiorgio on the phone and asked about the lavish lifestyle, including the rock he recently bought, he admitted they were poor money managers, but promised when his wife's new pizzeria shop opens, he would pay Marcine in full. And Steve made good, paying off a tenth of the bill - sending her a bank check for $150.