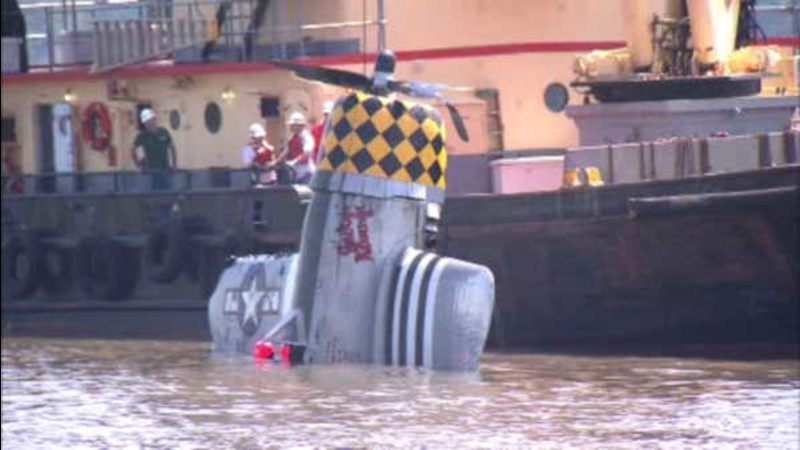 What caused a World War II-era plane to crash into the Hudson River?

The plane was pulled out of the water at about 11:30 a.m. Saturday by divers with the NNYD and the Army Corps of Engineers.

The plane is being examined at the Wall Street Heliport. Officials say it is safer to get into the aircraft than it is to get in your car and drive to work. Now, they are trying to determine what went wrong.

The plane was one of three that departed from Republic Airport in Farmingdale.

"There's no more danger flying this plane than an airliner or modern military aircraft, these air crafts are meticulously maintained, and some are rebuilt from the ground up," said American Air Power Museum Board Member Scott Clyman.

The FAA reports that it was a World War II vintage P-47 Thunderbolt aircraft that went down in the Hudson River, two miles south of the George Washington Bridge.

It happened just after 7:30 p.m. on Friday. Witnesses said the plane tried to make am emergency landing on the river, and that the pilot tried to unbuckle himself, but couldn't escape before the aircraft sank.

The body was taken back to the New York shore via police boat. Several police officers carried a stretcher to the dock.

Gordon was a member of the Iron Eagles, a group of pilots that perform at various air shows. The plane was scheduled to fly in the Bethpage Air Show at Jones Beach Saturday night.

Hundreds of people dining on the New Jersey side of the river saw the tragic event unfold.

"I'm a little shaken up, it's scary. Whoever was in there, they never came out," Melissa Rodriguez, a witness.

"It's very upsetting because you know, you watched somebody die," said Joanne Stolfo, a witness.

The two other aircraft that had departed at the same time returned to Republic Airport and landed safely.

#breakingnews THIS is the plane that crashed in hudson, based-republic airport. pilot still onboard. @ABC7NY pic.twitter.com/h5UUEQ5Xf9

The American Airpower Museum is celebrating the 75th anniversary of the P-47 Thunderbolt this weekend. Museum spokesman Gary Lewi said the plane is kept at the museum and was taking part in an air show at nearby Jones Beach this weekend.

Gordon was a veteran air show pilot with more than 25 years of experience, according to promotional material for a Key West air show last month. The website for the April 2-3 air show says Gordon was an "aerobatic competency evaluator" who certified performers to perform low-level aerobatics.

Gordon was a member of the Iron Eagles, a group of pilots that perform at air shows. The plane was scheduled to fly in the Bethpage Air Show at Jones Beach this weekend. Witnesses say the plane tried to make an emergency landing, and that the pilot tried to unbuckle himself, but couldn't escape before the aircraft sank.

Clyman called Gordon "an extraordinary pilot who understood the powerful message our aircraft represent in telling the story of American courage and valor."

"The FAA will determine the reason for the in-flight failure but we know this much. Bill was a nationally respected pilot and we were lucky to call him one of our own," Clyman said in a statement.

The three planes, the P-47, a P-40 and a photo plane, had been flying over the Hudson to shoot promotional material for the Bethpage Air Show, Lewi said.

The P-47 Thunderbolt crashed on the part of the river near where a US Airways commercial jet carrying 155 people splash-landed in 2009 in what became known as the Miracle on the Hudson.