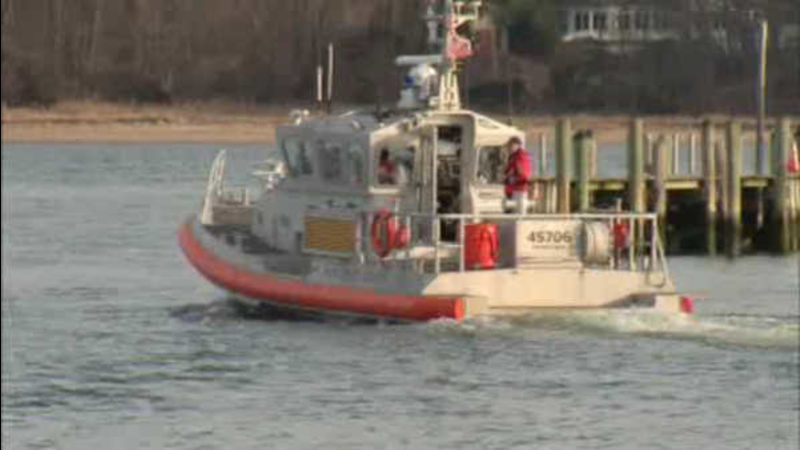 PORT JEFFERSON, Long Island (WABC) -- It was a valiant rescue effort in the middle of the night - in pitch blackness - with victims in the Long Island Sound.

Authorities say the Piper PA-28 small plane went down around 11:35 p.m., landing in Setauket Harbor. The plane was pulled out of the water Sunday night:

Video shows a plane being removed from the Long Island Sound.

Suffolk County police say two people were rescued after the crash and a third person also has been accounted for.

At 11:00 Saturday night, the four-seater plane from Massachusetts made an emergency landing after the engine lost power in the waters off Setauket. Eyewitness News is told there were four men on board. Emergency crews raced to the scene but their only guiding light was from the helicopter above.

Suffolk County Police officers on the scene heard cries for help from the water. They didn't have time to ask for permission. They grabbed what kayaks they found from neighbors' homes, and rowed out to the exhausted and freezing victims.

"Officers arrived to the scene, made their way down to the shoreline, commandeered kayaks from local residents and went into the water to rescue these victims," said Suffolk County Police Commissioner Timothy Sini.

A student pilot, Austricio Ramirez, was flying at the time the plane began experiencing difficulties and turned the controls over to the instructor pilot, Nelson Gomez, according to police.

Gomez landed the plane in Setauket Harbor and all four occupants were able to exit the plane into the water. Three men, Ramirez, Gomez, and Wady Perez, were rescued by Suffolk County Police officers. A fourth man, Gerson Salmon-Negron, 23, of Queens, remains missing.

Arlene Salac, a spokeswoman for the Federal Aviation Administration, said early Sunday that the pilot reported engine trouble and made the "forced landing."

She said the FAA is investigating and the National Transportation Safety Board will determine the probable cause.

Suffolk County Police called off their search at 7 p.m. Sunday, but will resume at 9 a.m. Monday. This is now being called a 'recovery effort', and not a rescue.