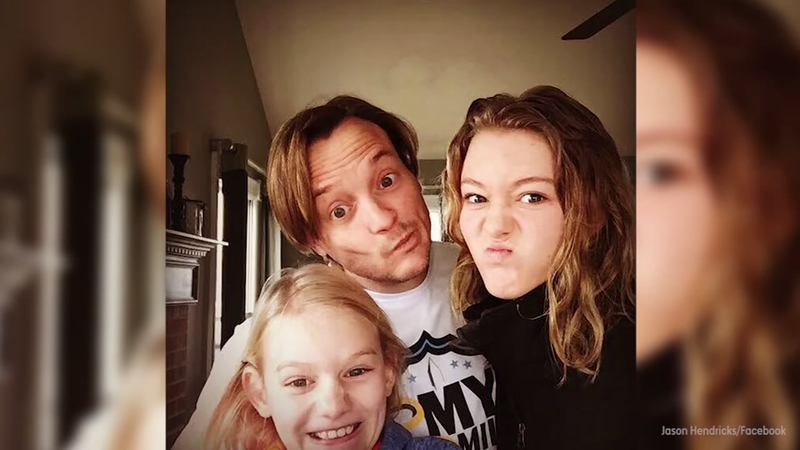 Emily and Jason Hendricks' 10-year-old daughter Evie has a special place in her heart for her dragon and dinosaur toys.

"She isn't like other kids," Emily explained to Babble. "She will spend hours playing with them in the front yard."

Which makes it especially difficult to hear that over the weekend, someone boldly walked into the Hendricks' front yard and stole them.

"It was on a whim that my husband decided to look at the security tape, but we didn't really expect to see anything," said Emily.
But see something, they did. The camera perfectly captured a woman with long braided hair walking down the sidewalk before detouring into the Hendricks' yard and making off with the toys. Although many people would be livid if they saw someone stealing from them, Emily and Jason realized that they needed to keep the situation lighthearted, for the sake of their daughter.

"Evie was watching the footage with us," said Emily, "and it's a very unsettling feeling as an adult to see someone has taken your property, so how were we going to explain that to a child?"

So on Sunday night, with Evie once again watching, Jason posted the security video to Facebook, along with a plea to the public.


"My daughter plays outside for hours with her dinosaurs and dragons," he wrote. "And she has done this daily since she was about three. It doesn't matter if it's raining, snowing, or blazing sun. She absolutely enjoys digging with them and making anything that contains mud and plants for them eat. Because the dinosaurs and dragons are rarely clean and don't like baths we ask that they stay outside. They are definitely not 'inside pets,' but she treats them just as well. It was pretty sad when she came to me this morning and said two of her favorites were missing from underneath the apple tree where she played until 9 PM Saturday night. I decided to investigate and review our video footage. I am very surprised to find someone coming into our yard and toting away toys. I sure hope that this person thought the toys needed a little adventure and will be returning them soon and I hope these dinos and dragons find their way back to their rightful owner."

Knowing that the toys weren't worth much, the Hendrickses didn't immediately call the police, but that didn't stop one of their friends from tagging another friend, Sgt. Robert "Bobby" Bagley, in the post, to see if he could help.

"Immediately, I recognized not only the area where the Hendrickses live, but also the suspect," Bagley tells Babble. "There are some train tracks that run not far from where they live, and I've seen a female with the same long, braided hair, walking along them towards the housing projects. So, I drove over there, and when I went to make a U-turn in a cul-de-sac, I saw the dragon laying on the ground with a broken arm."

Having two kids of his own - now 16 and 20 years old - Bagley wanted to get the dragon back to Evie. But, as he told Babble, "It was really late and I didn't think the Hendrickses would appreciate me ringing the doorbell in the middle of the night, so I decided I'd hold onto him until morning."

However, later that night, he hatched an idea. Since the little dragon was supposedly on an "adventure," Bagley decided to actually give him one before Evie woke up. And since Evie wouldn't be there to see it, he knew that he'd have to to capture the dragon's night on camera.

Obviously, because an adventure can be made more difficult with a broken arm, their first destination was The Charles Regional Medical Center (which was quickly followed up with a quick trip to get some super glue).

Then, once the dragon had both of his arms back in working order, there was nothing holding him back! Bagley took the dragon to the gym for some rehab...

Then after hitting up a local music venue, he recruited the dragon to help him with a few traffic stops.

When Bagley made it back to the station the next morning, his co-workers got a kick out of what he had been up to all night. And one fellow officer - after hearing that both the pet store and Chick-fil-A were closed during their midnight snack run - insisted that the dragon be treated to a cop's breakfast, and gave him a donut!

With the sun now up, the dragon made his way back to the Hendricks family, and Evie couldn't have been more thrilled.

"There is so much negative press about the police," says Emily. "And I wish that more people could see that there is a friendly side to officers."

Sadly, "Big Green Rex," the toy dragon's friend, still hasn't been found, which has prompted multiple offers on Facebook to replace the toy for little Evie - but Emily insists that it isn't necessary.

"It's very kind, but it's not about the money. If we wanted to, we could replace the toy ourselves. Right now, I'd really like to keep the focus on thanking the officers. There are so many that go above and beyond to help kids and we'd like people to focus on that, and urge people to find ways to support their local police - especially the ones who have to deal with children in true crisis situations."

"I feel overwhelmed by the response," he said with a lighthearted chuckle. "I never thought it would explode like this. I thought a few people would get a laugh, but I never expected it to be this crazy!"

And when asked what he wishes more people knew about his nearly 18 years on the force, he simply said, "I wish that people understood that under our uniforms, we are just regular men and women. We do our jobs to protect and support people - and sometimes, we also have a sense of humor!"

Well played Bagley, well played. What a way to honor, serve, protect, and bring a smile to us all.