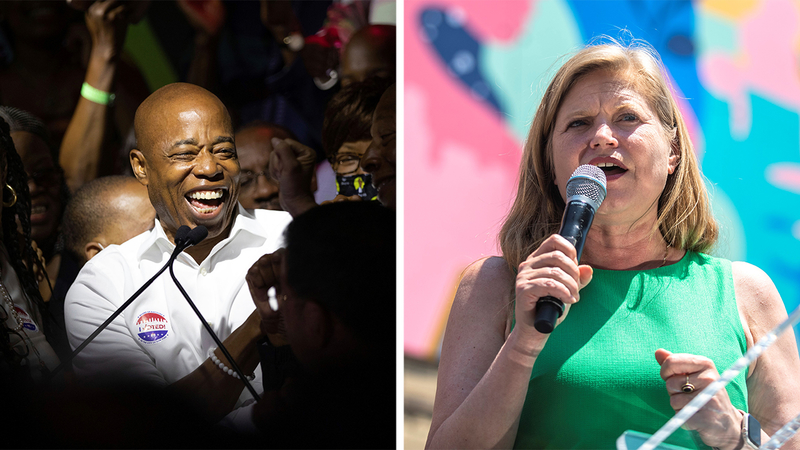 NEW YORK CITY (WABC) -- Eric Adams holds a lead of just over 8,400 votes in the New York City mayor's race, according to the Board of Elections' tally.

The margin was enough for the Associated Press to project Adams as the winner and for the Brooklyn Borough President declare himself the winner.

"While there are still some very small amounts of votes to be counted, the results are clear: an historic, diverse, five-borough coalition led by working-class New Yorkers has led us to victory in the Democratic primary for Mayor of New York City," Adams said.

It's the first mayoral contest in the city determined by ranked choice voting.


Maya Wiley, who stood in second place after primary night two weeks ago, fell to third place after the first ranked choice results. She remained there are the absentees were added.

The results are still not final. Some ballots are still unaccounted. It's also possible legal challenges could follow in a race so tight.

Voting in the primary ended June 22. Early returns showed Adams in the lead, but New Yorkers had to wait for tens of thousands of absentee ballots to be counted and for rounds of tabulations done under the new ranked choice system.

Under the system, voters ranked up to five candidates for mayor in order of preference. Candidates with too few votes to win were eliminated and ballots cast for them redistributed to the surviving contenders, based on the voter preference, until only two were left.

The city's first experience with the system in a major election was bumpy. As votes were being tallied on June 29, elections officials bungled the count by inadvertently including 135,000 old test ballots. Erroneous vote tallies were posted for several hours before officials acknowledged the error and took them down.

The mistake had no impact on the final outcome of the race.

Mayor Bill de Blasio, a Democrat, was barred by the city charter from seeking a third term.