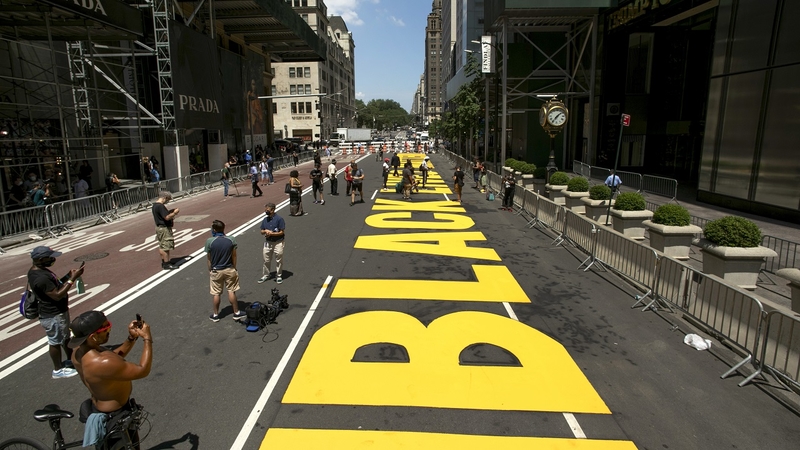 De Blasio was flanked by his wife, Chirlane McCray, and the Rev. Al Sharpton as they helped paint the racial justice rallying cry in giant yellow letters as activists chanted, "Whose streets? Our streets!"

President Donald Trump has referred to the Black Lives Matter murals as a symbol of hate, tweeting the sign would denigrate Fifth Avenue.

NYC is cutting Police $’s by ONE BILLION DOLLARS, and yet the @NYCMayor is going to paint a big, expensive, yellow Black Lives Matter sign on Fifth Avenue, denigrating this luxury Avenue. This will further antagonize New York’s Finest, who LOVE New York & vividly remember the....

....horrible BLM chant, “Pigs In A Blanket, Fry ‘Em Like Bacon”. Maybe our GREAT Police, who have been neutralized and scorned by a mayor who hates & disrespects them, won’t let this symbol of hate be affixed to New York’s greatest street. Spend this money fighting crime instead!

"What it says is America is towering over hate," Brooklyn Borough President Eric Adams said.

The Naked Cowboy, a Trump supporter, galloped up from Times Square to say he supports the Black Lives Matter message, but not the mayor's decision to the mural in right front of Trump Tower.

"The symbolism is awesome, and if he was trying to say we can do this (together) it would've been the greatest event that ever happened," he said. "But it's not what happened. It's kind of petty."

"To tweak him, and anger him, and insult him, which is exactly what he does, it has to be done," participant Paul Rossen said.

De Blasio says the murals are to honor members of the black community who helped build New York, and members of the movement taking part in the painting hope the message lasts long after the paint dries.

"Black lives do matter, and I hope it's not just something written on street and driven over," participant Amber Fairweather said.

As more murals pop up across New York City, a Black Lives Matter mural was unveiled in Harlem on Wednesday morning.

The big, bold letters were drawn on Adam Clayton Powell Boulevard between 125th and 127th streets. It was painted by local artists and community group members.

The mayor has pledged to paint multiple Black Lives Matter murals across the city. There are currently two other murals in Brooklyn and one on Staten Island.