SUV crashes through fence, ends up in backyard pool on Long Island 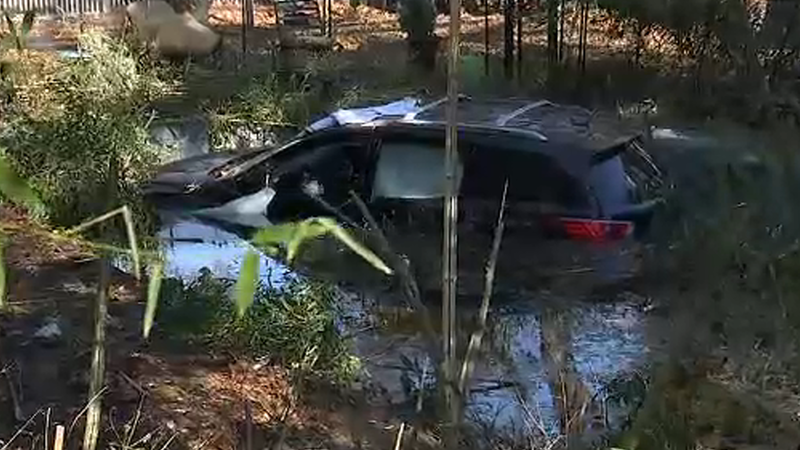 SUV crashes through fence, ends up in backyard pool on Long Island

PORT WASHINGTON, Long Island (WABC) -- A drive turned into a dive on Long Island Wednesday morning and landed two men in the hospital.

Authorities say an Uber driver lost control of his SUV on Sunnyvale Road in Port Washington just before 10 a.m.

He crashed into a fence, went airborne, and splashed down in the shallow end of a backyard pool covered with a tarp.

"I was in my bedroom, and I heard this really bad crash," Carol Kronenberg said. "So from what I can understand, the SUV hit my fence, flew over this fence, and ended up in my neighbor's pool."

Police and firefighters helped the men out of the halfway-submerged vehicle, and they were taken to North Shore University Hospital for observation.

"Luckily, they landed in the shallow end," pool owner Deborah Wrynn said. "And really, it was a little unnerving."

She said she first saw bamboo branches down, and that's when she looked further and noticed the roof of the SUV bobbing in her pool.

"The house shook from the impact," she said, "I guess it hit the water in the pool. I look out the kitchen window and I see water dripping down all of the windows in the back of the house, and I was like, what happened?"

The injuries are not believed to be serious.

"There was two fellas that came out," Kronenberg said. "They were a little on the elderly side, but they're OK. They were taken away on stretchers to nearby hospitals."