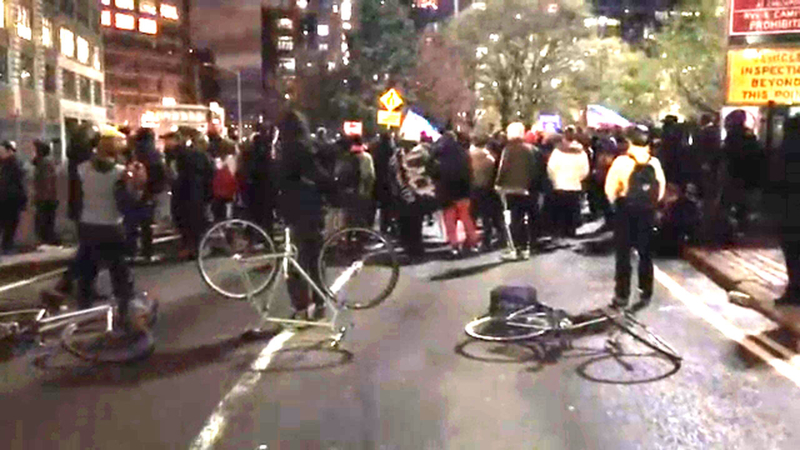 NEW YORK CITY (WABC) -- Protests broke out in New York City leading to the closure of the Holland Tunnel on Thursday night.

Demonstrators protesting the police shootings of Adam Toledo in Chicago and Daunte Wright in Minnesota blocked traffic on the New York side of the tunnel.

Police were on the scene until the protesters dispersed.

There were no immediate reports of arrests.

On Wednesday night, a man was one of eight people arrested during protests on the Upper East Side after he allegedly elbowed an NYPD sergeant in the head.

I want to let every New Yorker know that their right to protest will be protected by members of the NYPD. However, damaging property, destroying vehicles, and disrupting the community are offenses that will NOT be tolerated. pic.twitter.com/TLgsFJFjiN

Police say the assault happened at the intersection of Fifth Avenue and East 76th Street at around 9 p.m.

The officer was cut in the head.

Seven others were also arrested "after they engaged in violent behavior and were observed breaking multiple windows of businesses, yelled and harassed outdoor diner and made graffiti on multiple buildings."

"I'm past asking," Shea said. "I'm actually demanding at this point. They need to go to jail. They need to be held accountable. They were arrested for misdemeanors. They cannot be not prosecuted. We are going to follow these arrests... A misdemeanor in New York State, you're eligible for up to a year in jail. Well, I can't think of anyone that deserves a year in jail better than that."

Bucknavage was released without bail, but with "the highest level of supervised release," as prosecutors sought more stringent conditions.

He was previously convicted in another case of assaulting a police officer during a protest back in July.

Had he stayed out of trouble until June 4, that charge would have been dismissed.

Chicago police bodycam video of the police shooting of 13-year-old Adam Toledo was released to the public on Thursday, according to the Civilian Office of Police Accountability.

A gun was found nearby, but video shows Toledo put his hands up without a gun when the officer fired.