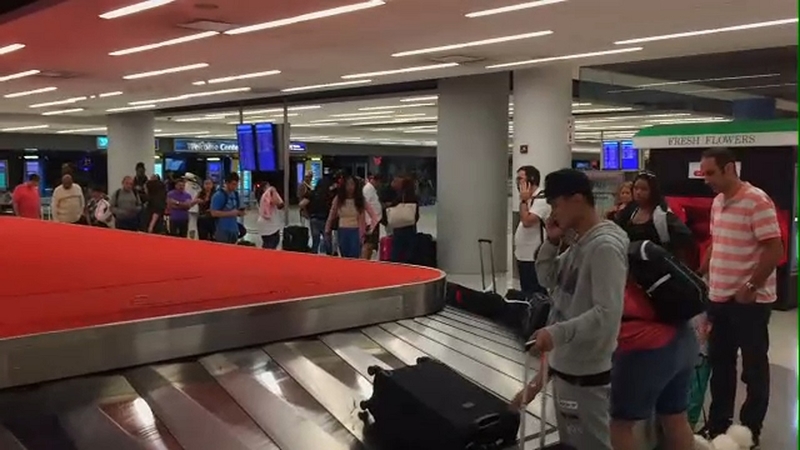 JAMAICA, Queens (WABC) -- JetBlue Flight 8086 arrived at JFK Airport a bit behind schedule on Tuesday night - though nobody seemed to mind.

"We were happy to be landing. I'm happy to be here - thank God," said Blanca Collura Flura.

Part of the reason for their delay came as an outer band from Hurricane Maria lashed the San Juan Airport just before they could take off.

"I was terrified," said Elvira Galarza of Queens Village.

This was all just a taste of what they would face if they had stayed behind in Puerto Rico.

Both Nathaniel Rivera and Galarza had been scheduled to head home to Queens Village on Wedesday, and watched with increasing fear as their hotel worked to secure pool furniture. Local news sounded the alarm, and their original flight home was cancelled.

"I was crying, I was crying. As soon as they canceled our flight, I started crying nonstop - I was praying a lot hoping something would be done to get us to a safe place," added Galarza.

On Tuesday morning they tried again - and they found seats. JetBlue had scheduled an extra plane to load up as many people as they could and fly them safely home.

"Very tense on the first half of the flight, but once we were up in the air we're good. Everyone was pretty much more calm and collected," said Rivera.

Rivera and Galarza were the lucky ones. A few hours later after they departed, Eyewitness News anchor Joe Torres tweeted a picture of the departure board at the San Juan Airport:

If you're here, you're staying. No flights off the island as #HurricaneMaria moves closer to PR. pic.twitter.com/odftpQLpDA

At the baggage claim at JFK, it was all smiles.

"I'm gonna be a JetBlue fan forever, because they got me home safe and sound" said Vaughn Bryan.