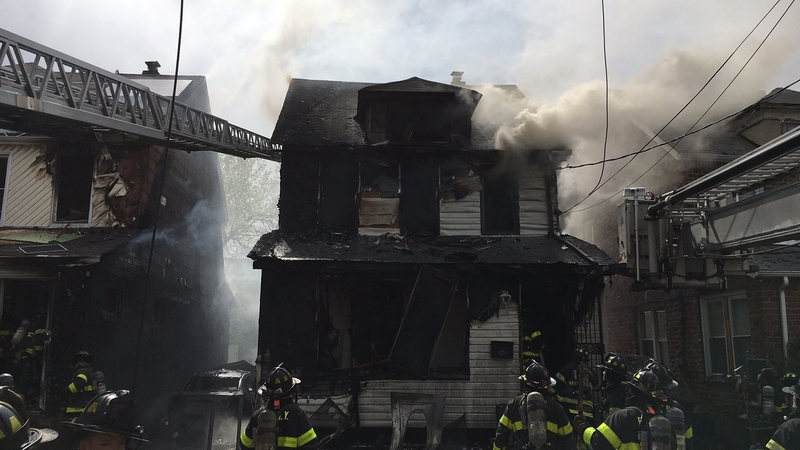 3 children among 5 dead in Queens fire

The fire broke out in a house on 112-16 208th Street in Queens Village just after 2:30 p.m. The fire also spread to an adjacent home - that home was damaged, but no one was home at the time.

The three-alarm fire took hours to get under control, and the wooden frame of the house burned quickly.
FDNY Commissioner Daniel Nigro says that the youngest victim of the fire is believed to be two years old, and the oldest victim is believed to be 21 years old. A 46-year-old man came out of the second-floor window of the home. He is currently in fair condition. All of the victims were from the same family.

"This is a terrible and sad time," Commissioner Nigro said.

When flames started at the home, Zedias Mudzimba was driving - he was the first to call 911.

"I pulled over, and then I see a guy on the roof saying 'help, help!' And then I called 911 and then the guy jumped," Mudzimba says.

At the same time, Lloyd Taylor, who lived in the basement of the home, smelled something burning, and ran upstairs to check on his neighbors.

"When he opened the door, a whole big smoke blasted out. I looked in, but it was no way of going back in - it pushed us out the door," Taylor says.

The flames were so intense that the black smoke drew neighbors from their homes, and the flames could be seen by firefighters before they arrived, leading them to call in extra crews.

Distraught family members and neighbors showed up to the scene, crying and asking 'why would God let this happen?'

"They treated me like family ever since the day I moved here. They helped me out so much," Taylor added.

Right now, it is unclear how the fire started. Mayor Bill de Blasio says there are still many 'unanswered questions.' Commissioner Nigro says that fire marshals will work to determine the cause. The street is shut down while crews work to investigate the cause.