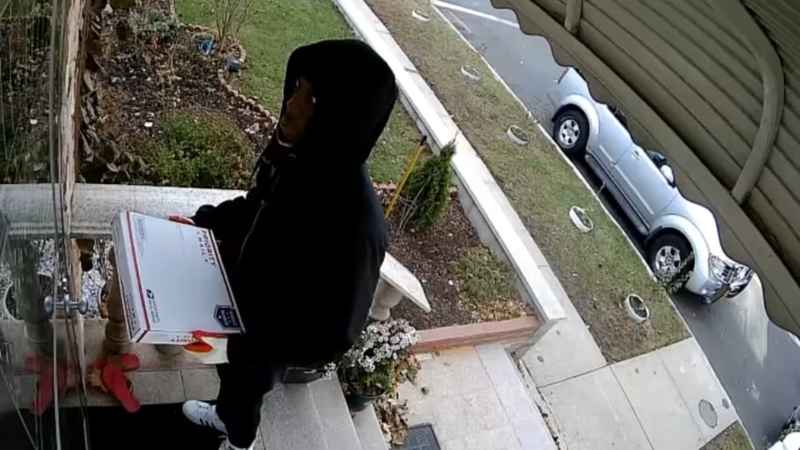 HOLLIS, Queens (WABC) -- Police are searching for a trio of home invaders who they believe struck two times in Queens over the weekend. In both cases, the suspects posed as deliverymen before ransacking one home and shooting the owner of another with a pellet or BB gun.

The first incident happened just after 5 p.m. Saturday at a home on 133rd Avenue near Van Wyck Expressway in South Ozone Park. Authorities say a suspect wearing a FedEx jacket knocked on the door, and when a 17-year-old girl opened the door, the suspect put a gun to her head and pushed his way inside. The teen and her 15-year-old sister were forced to sit in the room while two more suspects entered the home, wearing masks and brandishing black firearms.

One of the suspects remained downstairs, while the two others ransacked the upstairs area. Police say they repeatedly demanded money and gold from the teens before stealing jewelry, computers and electronics before fleeing the scene.

The girls' mother, Nanda Persaud, spoke exclusively to Eyewitness News, telling reporter NJ Burkett that her children were home alone at the time.

"It's bad, and people should really watch out for these guys," she said. "They had ski masks, half-masks. All of them had guns. There was three of them. They got them on the floor. They even thumped my daughter with the gun."

The terrifying ordeal lasted about 20 minutes, and thankfully, neither child was seriously injured.

"They took my jewelry, the kids' computers, laptop, iPod, phone," Persaud said. "They took everything."

The crime is shockingly similar to an attempted home invasion caught on surveillance camera Sunday afternoon in Hollis. The video shows the moments three suspects shot at a homeowner with a BB or pellet gun on 197th Street.

Police say the man sent his 12-year-old son to answer the door and that one suspect pretended to deliver a package, then tried to shove his way into the home.

When the 50-year-old homeowner pushed the suspects out of his house, authorities say the suspects opened fire and ran away. The victim was shot in the leg and treated for a minor injury.

The three suspects, two of whom were hiding behind a nearby fence, fled the scene.

The victim's son said his whole family was home at the time, including young children. The children were in the basement at the time, so they did not see the incident.

"We have a lot of leads in the case, and we will push forward," NYPD Chief of Detectives Robert Boyce said. "Home invasions now citywide are down, down very dramatically. It looks like this is a pattern emerging out of Queens South this past weekend."

The victim's neighbor said the home has been hit before. In fact, she said several residents in the neighborhood have been recent victims of home invasions, including hers this past summer.