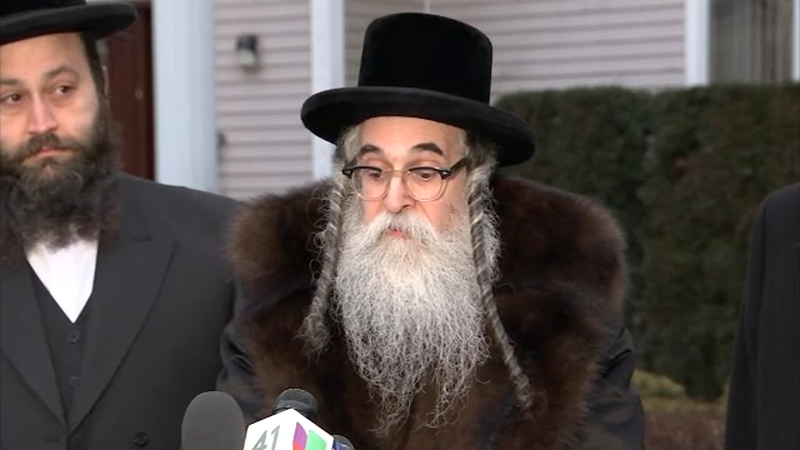 Rabbi whose Hanukkah party was interrupted by attack calls for healing

MONSEY, New York (WABC) -- The rabbi whose Hanukkah party was interrupted by a machete-wielding attacker is calling for healing.

Five people were slashed with an 18-inch machete during a celebration at Rabbi Chaim Rottenberg's home in Monsey in December.

On Wednesday, for the first time since the attack, he spoke out about the assault and the ways to end hate crimes in our communities.

"This horrifying event is a divine call for soul-searching," he said. "Let us take this moment and create change. Unite in reconciliation and start a new page with love and peace."

The rabbi's call to hit the reset button was made twice Wednesday - once outside his home and earlier in the day after he accepted an invitation directly from Gov. Cuomo to give the invocation at the State of the State in Albany.

"We are blessed by God in the miraculous fashion in which the attacker was subdued," Rottenberg said. "Limited what could have been a far worse and fatal event."

Grafton Thomas, 37, has been charged with five counts of attempted murder, burglary and federal hate crimes in connection to the December attack.

Rabbi Rottenberg never mentioned him by name in his remarks, and that was clearly on purpose.

"I implore you, please do not politicize this tragic event," he said. "Do not attach the haulers that have taken place to any political agendas be domestic or abroad."

Instead his focus and message was all about continued healing - both physical and spiritual.

"Mr. Yehosef Neumann remains in grave condition and is in great need of our prayers," Rottenberg said.

While Rabbi Rottenberg is calling for healing, security is still a concern. There is a state trooper posted in front of the synagogue next door to his home as well as other temples in the area.

And that will be the case for the unforeseeable future.