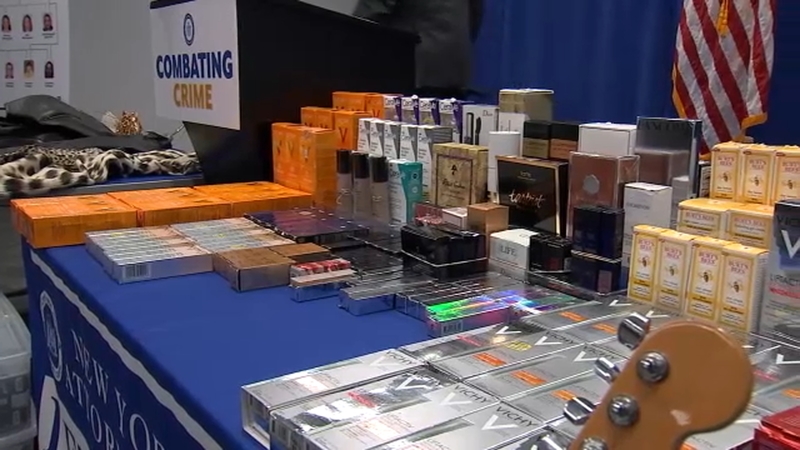 FRESH MEADOWS, Queens (WABC) -- The owner of a pawn shop was busted for allegedly masterminding a massive retail theft operation.

Roni Rubinov, 42, would pay people to steal merchandise from retail stores like Bloomingdales and Rite Aid and have them bring them to the shop where they would receive cash for their cooperation.

The investigation into the operation took three years and resulted in Thursday's arrests.

Those people, called boosters, desperate for cash, would grab the items in the type of brazen retail thefts seen across the country and sell the items to Rubinov and his associates for a fraction of the value.

The stolen goods weren't sold at the shop but on eBay. Rubinov would instruct people to steal things that would sell well on the bidding site.

The New York Attorney General's office along with the NYPD and Mayor Eric Adams displayed a sample of the stash they found at the alleged ringleader's warehouse. Almost $3.8 million worth of items were recovered in Fresh Meadows, where Rubinov lived in a mansion.

This is something Mayor Adams made a campaign promise to crack down on. And he and the investigators on the case say these were not victimless crimes.

"This is just not shoplifting," Adams said. "This is organized crime."

Department stores and drugstore chains were all targets, which city officials say traumatized store employees and hurt future employment when those stores would close.

"Some would look at this and say, what's the big impact," Adams said. "It is a huge impact on our economy. It erodes trust. It sends a signal that we are in a city out of control."

"Probably the most offensive and egregious is that Rubinov also purchased EBT benefits or food stamps from some of these same boosters in exchange for cash," James said.

Rubinov and 40 other people have been charged with enterprise corruption, money laundering, and other counts which could land them up to 25 years behind bars.

Mayor Adams said this isn't about criminalizing poverty but is a case about sheer greed. Pointing out that New Yorkers shouldn't have to go into stores and see items locked up or lose retailers in their neighborhoods due to the actions of a few taking advantage of vulnerable people in need of help.

Candace McCowan has more on the mayor's meeting with business leaders from Chinatown.